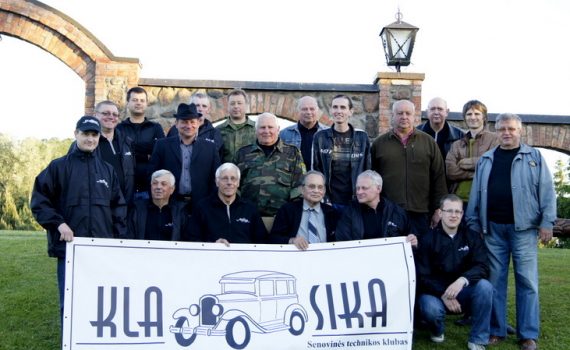 On May 28, the antique cars club “Klasika” officially opened its exhibition season. The club accepted an invitation from the “4×4 perimeter” cross-country off-road vehicles marathon to come to the festival in Paceriaukste (district of Birzai).
At 15:00, Klasika’s members gathered in their antique cars near city’s municipality. Half an hour later, 17 antique cars and 7 motorcycles, led by a soviet-times GAI police equipage, drove out to the main street and headed towards Paceriaukste. The viewers were dressed in their nicest clothes and met us in ovations at P. Poskus School’s playfield. While driving in a circle of honor, commentator E. Malinauskas introduced all exhibits and equipages. He stated that antique vehicles remind us of historical events and decorate our modern lives. And the 21st Volga – a prestigious XX century antique vehicle!After introduction, the antiques vehicles were lined up on the green grass and up until 19:00 were surrounded by curious viewers. The visitors took photos with antique cars in the background and talked to the owners. Young adults and children showed an exceptional interest in this event. For elders, separate exhibits reminded of their youth years. Dalius Linkevicius American 1929 “Oldsmobile” and his equipage got the most attention. According to visitors, the car reminded of interwar Smetona period in Lithuania.
All participants were invited to magnificent community yards, where homemade pancakes, peas soup and, of course, birzai beer awaited. Together with musicians from rock group “Thundertale”, with our whole hearths, we sang “Žemej Lietuvos, ąžuolai žaliuos”. When the exhibition ended at 19:00, we went to D. Linkevicius homestead in Sodeliskis village. Here, in a beautiful environment and surrounded by caring owners, we discussed the whole event. Club’s manager Voldemaras Aisporas presented greetings from club president and informed us about future plans, exhibitions, international collaboration programs and other club actualities. Club’s guest, historical technology enthusiast from pasvalys, Eugenijus Malinauskas evaluated club’s performance highly and encouraged further cooperation. Everyone agreed – club’s activities are rated positively and members are very determined to organize more great events for people of Birzai and the whole Lithuania.
The next show will be far away from our hometown. On July 8-9-10, there will be a traditional “Days of Live Archeology” festival in Kernave, the historical capital of Lithuania. As part of the festival on July 9th, there will be an old fashioned cars show organized by our club of antique vehicles “Klasika” and antique cars admirers from Sirvintos. The exhibition starts at 14:00. We welcome everyone to participate or come visit us! For more information, please visit www.klasika.us