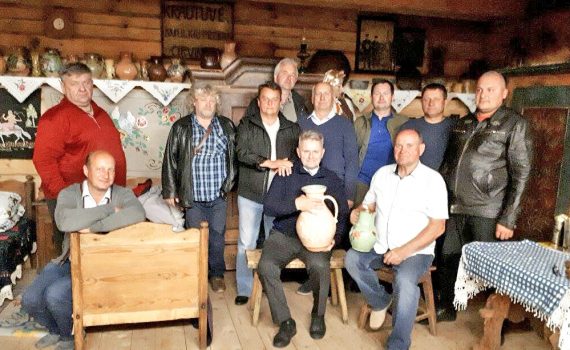 It has become just regular that the discussion of the results of antique vehicles “Timeless Classic” festivals and summer meetings of club “Klasika” members are held annually in the Klementas Sakalauskas’ museum. Moreover, Mr.Klementas and his son Gintautas have been members of the club “Klasika” for several years now. So, on Friday, August 25, the members of the Antique Vehicle Club “Klasika” gathered in Panevėžys. The cozy, relaxed atmosphere of the antiquity and the hospitable Sakalauskai family bring together the “Klasika” members to interesting conversations and discussions every year.

The director of the club Egidijus Einoris started the meeting. He stayed for a longer time at the main event of club “Timeless Classic 2017”, briefly reviewed three more interesting events of the Baltic States in the field of historical technique in Riga, Parnu and Jūrmala. Undoubtedly, the most important issue for club members was and there is an exhibition of antique cars in Biržai. This year’s “Klasika” event “Timeless Classic 2017”, according to club members, was the best and of the highest quality in all nine years of the club’s activities. Without long speeches, the expenses of the festival were approved, and overviewed the flaws and perspectives of the event. After that, we came to a longer discussion where it was being decided where and how to celebrate the antique car festival “Timeless Classic 2018”, which will coincide next year with the 10th anniversary of the club “Klasika”. Since this event of antique vehicles has been going on together with Biržai town celebrations for many years, it was decided to postpone decision of the club members until autumn, until the forthcoming city festival format and presentation of the program project.

The next question, which was discussed at the club members’ meeting – the publishing of wall calendar “Klasika 2018” and its marketing. If there were no questions about publishing (the calendar was already released at the end of July), the issue of realization of the calendar caused a lot of consideration. It’s good that these discussions were quickly suppressed by much more interesting events. Sigita Jakubonienė, the head of the photo sessions of the calendar, and photographer Silvija Pranauskė, were honored with the letters of gratitude and flowers. Only this year, they contributed to the publishing of the club “Klasika” calendar. These artists have brought a fresh and distinctive feature to the creative process of “Klasika”. Thanks for them!

All other remaining questions were discussed in a more entertaining environment: by tasting beer made by the club member Jonas, looking at new collections of Klementas’ antiques, or just treating ourselves. Just unwittingly turning around in the dark and urging the other halves of  club members,  it occurred that it’s time to say goodbye … And preparing to leave, it was reached the common decision – on the 4th of August next year, to celebrate the 10th anniversary of the club “Klasika” solemnly and unusually!
So thanks for all the gathered, and especially for the hospitable hosts: Jūratė, Gintas and Klementas Sakalauskai!