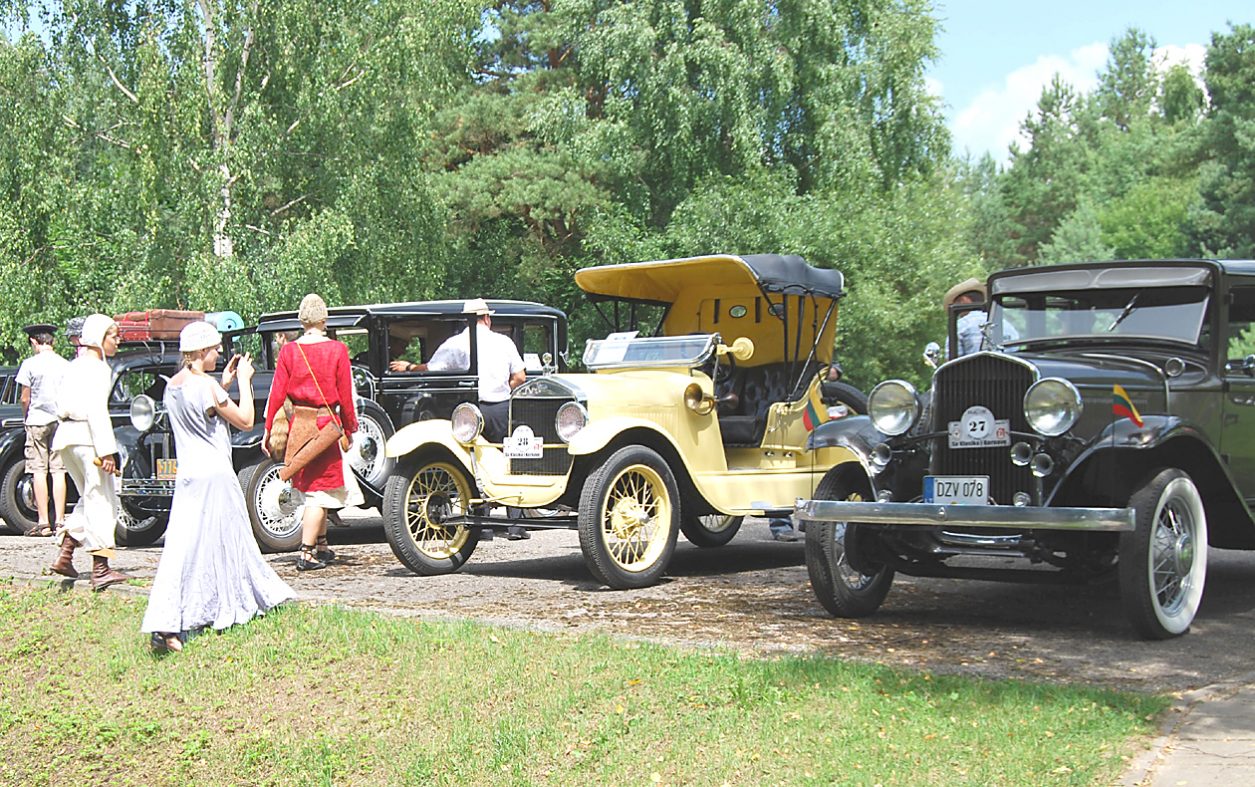 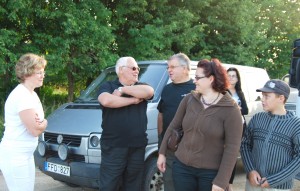 To Kernave “Bizieciu Zodis” accompanies “Klasika” and the winner of the photography contest Jurgita Ceponiene and her family. We set off the morning of Saturday with a long way ahead of us. Next to Pabirze, all of the participants unite. Not all of the participants are going themselves: the expensive classic automobiles are driven on tow trucks. Five cars for the parade are are being put on tow trucks by Dalius Linkevicius: “Mercedes Benz” (1941) firetruck, already seen my the people of Birzai, GDR (1973) with a plastic cable “Traband” (D. Linkevius states that this model was very popular and economic car in East Germany, which he prepared in a couple of days- the car was in a garage with other oldies for a long time), two motorcile, (1929) “Oldsmobile,” which was clean, and restored, and only two years since staring her trips to parades. From Pabirze, with its own wheels, moves the starter of the parades Aloyas Vasylius french blue “Volga,” Antanas Valeckas “Dodge Monaco,” Virginijus Kucinskas “Cadillac Eldorado.” Slowly, we are accompanied by a “Mercedes” from Panevezys, and the rest of the cars we meet in Sirvintai. We even greet the participants from Latvia, who have prepared since night, and are taking down their tents. The Latvians were invited by the people of Birzai. 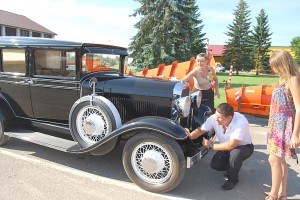 HARDSHIPS. The whole Linkevičius family cleaned dust from the Oldsmobile.

The first longer stop was at Sirvintai Road repair workers place. Here, the cars from tow trucks are being almost carried down. Lionginas Velicka from Birzai, has fixed his debut 1960 “IZ-56.” He is pulling the motorcycle down with his wife Dale, and are shining the bike . Mr. Lionginas says that he has two motorcycles ready for parades. With “IZ-49,” he has went to few parades, and is setting off to Kernave with his own restored “IZ-56”.

Next to a shiny “Oldsmobile” the of Dalius Linkevius were working hard with towels to shine the car even more. His wife Nergina, daughters Egle and Eivile help. “I hope we do not hit any dirt” states Mrs. Neringa, who did her hair, and had a hat with a vail, but did not have time to buy a dress form 1929. Around the “Volga,” Miss “Klasika” (Smilte) is jumping around, who is the niece of the clubs president. And Smilte’s parents were taken to the marriage hall by Egidijus with that same “Volga” when they were getting married. Today, Smilte is acompanied by her parents Nida Alonderiene and Vytautas Alonderis. 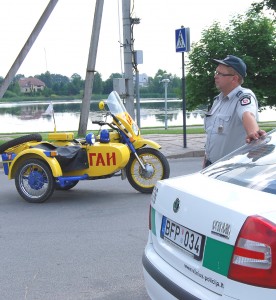 HELPERS. And the local Širvintos policemen got help from the Vabalninkas militia.

Motorcycles are lining up to the parade in Sirvintai, and controlled by Voldimaras Vidugiris, who arrives in a soviet police motorcycle and  uniform. Later, Mr. Retro Police Officer laughs, saying that it is nice to see the elders reactions, when they see him on his classic motorcycle dressed like that, it is probably impossible to erase that sight from their minds. The younger drivers react to the police officer with a smile, to them it is egzotic. V. Vidugiris tries to control the parade, when stopped at an intersection. The participants to the parade are given priority by the lights and sounds of the firetruck “Mercedes”. Later, E. Einoris adds “Thank you Sirvintos police officers, who helped a lot with the parade and garanteed order.

When the participants of classic automobile parade stopped at the town square in Sirvintos just for an hour, they recieved quite a bit of attention, but because they were used to the attention in other cities, the participants were almost dissapointed by not enough viewers. 71 partipants were registered.

According to the plan, it was time to move to Kernave. “Klasika” would not be classic if we were late even a minute. The masterminds behind these words get to drive a 1932 “De Soto,” which is driven by the owner, Sigitas Zajarskas, from Pasvalys. I had to run quickly to the store, because without a proper hat, you cannot get into such a beautiful vehicle. Mrs. Alma, Austejus, and Sigitas dressed up like real retro lovers, even the dog Kite has a proper hair due. 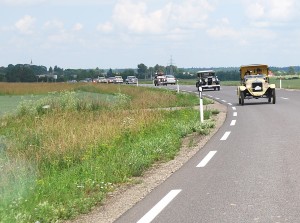 PARADE. Mr. Gvidonas sets the speed of the parade driving his Ford T. Going any faster than this is prohibited. Especially uphill.

The parade is started by the motorcyclists, and the “De Soto” follows. Another S. Zajarskas owned vehicle a “Ford T,” which is driven by a real history buff, Gvidonas Cepulionis. Later mr. Gvidonas states that 1926 yellow “Ford T” is one of 15 milion made, which 1908-1927 was in mass production by “Ford”. Every ten seconds a new one was made. “Ford T,” which has two gears and a third-reverse, 20 horse power, can drive at 20 mph (to a hill, even slower, otherwise the engine starts overheating). The motorcycles in the front have to drive at a more rapid rate, because their engines are cooled by air and overheat quickly, thus the speed of the “Ford” is too slow for htem. 23 km to Kernave is driven in an odd arrangement: in the front – always going quicky motorcycles, and in the back – “Ford T” complient speed followers. 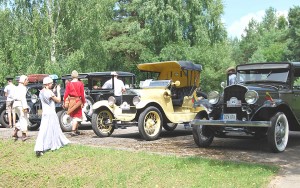 EXOTICS. The automobiles and their pretty ladies. The people from Biržai did not mind to be called “antique fossils” by the local press.

Finally we reached Kernave. All of the automobiles reached the destination point, just the motorcycle riders have some problems, but they conquer it. The president of the club, Egidijus, is lining up the vehicles again. So far everything is going to plan.

And we are left with about 5 hours for the parade in Kernave. “Klasika” club member prepared advertisement about the event is being shared in every corner of Kernave. The turnout is beyond great! So many questions about the automobiles. The ladies with their hats, beautiful suits, and highheels, are holding their composure very well on this hot day. Not a surprise why the viewers are appreciating not only the automobiles, but also the owners who have put in their own sweat to make this beautiful event happen.

When the clock struck the needed time, the participants gathered and said its goodbyes to Kernave and started driving towards the villa in Valiukiskiai, where a traditional evening would take place: the awards, classic music (with Klaipeda music theater soloists), rock group concert, dancing, games for the kids (keep in mind that “Klasika” goes to its events with family, because it is just as important as beautiful automobiles), and contests. With shishkabobs, Lithuanian sausage, beer, Russian kvass and long conversations about “Klasika,” its plans, and the events of this day, fun was all around.

Only after the end of the days schedulle Egidijus – the president of “Klasika,” and his vicepresident – Voldemaras Aisporas can join the festivities. Later the men would explain how they started to prepare for the parade in winter, and still had much to do weeks before the parade. “Klasika’s” workers had to visit Kernave the Friday before the event to make every detail perfect, even putting up signs limiting traffic to the streets of the parade, which were their own. Even the advertisements were placed around the city to remind people of the event on every electric post, intersection, and bulletin board. Even the signs for the parade participants to know exactly what street to follow, so that they did not get lost. Mr. Sigitas from Pasvalys states that he has been in many events before, but the organizational skills of the people of Birzai and “Klasika” are unmatched.

The organizers of the event, “Klasika” members, admit that to organize an event like this, it costs them many sleepless nights, but they did not even want to mention what price tag is attached to such an event. Automobiles are expensive, parts extremly rare, and gas milage is much less than those of new cars. So without the sponsors, the club would have it very hard. First, the club is sponsored by its members. The sponsors for this event are “Birzu Alus”, “Rinkuskiai”, “Agaras”, “Ponoras”, “Birzu Duona”, “Lytagra”, and a couple of sponsors who prefer to remain anonymous.

After a pleasant evening, the participants of “Klasika” are slowly comming out of their tents. Everbody is waiting for the villa’s owners promised delicious soup. Mr. Aloyzas next to his “Volga”, heats a coffee-pot and asks who will be drinking coffee, and who will choose the tea. With his “Volga” travels everything including a kettle, tent, bedding, water, dishware, etc. “I also plan to carry a portable shower,” – smiles Mr. Aloyzas.

The soup – with fish, a bit late, but everybody is waiting for it. When called to the pots, instantly a line forms.

From Kernave to Birzai we ride in Antanas Valeckas 1975 “Dodge Monaco.” The most important was to get safetly through a narrow forest road with a 2 meters 15 cm wide car and not scratch it. Mr. Antanas states that he found his vehicle, or something like it in the U.S. He has put a lot of time, effort, and money that the “Dodge” would shine like the color of gold. This model has 12 cylinders, 5 liter engine, the only thing that is unclear is how much gasoline it needs. Mr. Antanas talks about the nearest plans of “Klasika:” maybe do a parade in Birzai at the annual Birzai festival, in late August, and will participate in the classic automobile club parade in Jurmala, in early Septemeber in Panevezys.

We wanted to thank the club “Klasika” and the newspaper “Birzieciu Zodis” for the wonderful vacation that we won to Kernave. A very grateful thank you we say to the president of the club Egidijus for the constant caring of us. Club “Klasika” is totally cool. Good luck to you!