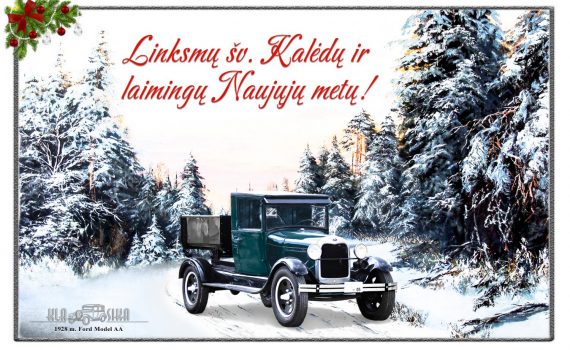 
As Christmas approaches, it has already become a beautiful tradition to briefly review the annual activities of The Antique Automobile Club Klasika and introduce it to the public interested in vintage vehicles. So how significant was 2021 for the classic lovers and how will we meet the New Year?

Season opening
For the opening of the 2021 season of the club Klasika, a trip by vintage cars on the route Kaunas – Kėdainiai – Krekenava – Panevėžys was chosen. This trip was organized by the club members Vytautas Gineika and Arvydas Gineika.

10 vintage cars left Kaunas on Saturday morning, June 5th. In Kėdainiai Old Market Square, another 16 club cars joined the members of Klasika. After setting their cars for the exhibition, the Klasika members toured the sights of Kėdainiai, then the caravan of vintage cars turned towards Krekenava. The first stop there was Basilica of the Assumption of the St. Virgin Mary and after visiting the sanctuary and hearing its glorious history, the club Klasika members turned to the Krekenava Regional Park.
The following was an exhibition of vintage cars in the city center. While the citizens admired the history of motoring, the club members had lunch and prepared for the next trip, which led to Panevėžys. Along the way, many places were visited, such as the Upytė mound, the Čičinskas hill and the final destination – Piniava. The last evening of the club Klasika trip took place in the Klementas Sakalauskas Museum.

Requirements for the recognition of historic vehicles
As of February 1st, 2021, amendments to the legal acts regulating the new procedure for the recognition of vintage vehicles came into force. They provide for the inspection of historical motor vehicles at roadworthiness testing stations, by pre-registration.
What steps must an owner of an antique vehicle take in order for a vehicle belonging to him to be recognized as a historical motor vehicle? Experts in the ancient technology of the club Klasika tried to answer this, popularly and visually explaining the requirements of the new order

Photo contest for the Klasika club calendar
Every year, the antique automobile club Klasika releases a limited edition of wall calendars with images of historic cars and motorcycles. The traditional photo contest of the Club Klasika calendar, which lasted for more than a month, ended on June 15. Seven photographers took part in this year’s Club Klasika calendar photo competition and submitted their photos: Kęstutis Banevičius, Andrius Zigmantas, Jokūbas Šinkevičius, Markus Kliss, Daiva Grigonienė, Ieva Slonksnytė and Vytas Chlevinskas. The regulations of the competition stated that the jury of five people must select the three best photos by the June 20, which will be placed in the 2022 calendar of Club Klasika. 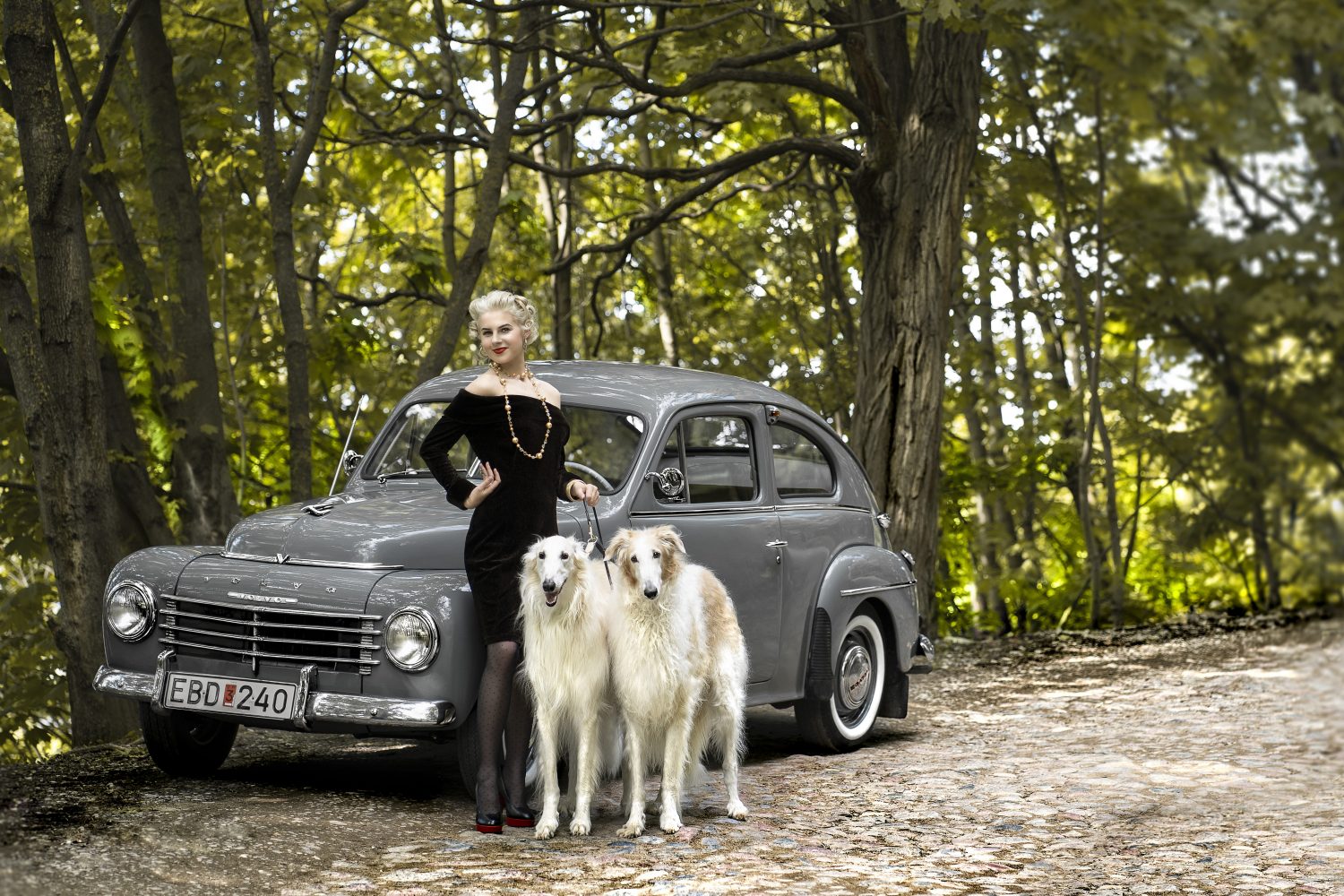 Thus, after summing up the votes of the commission, two photographers were picked as winners: Markus Kliss and Daiva Grigoniene. Copyright agreements have been signed with these photographers and their works will be published in the 2022 Club Klasika calendar. In addition, the winners of the competition were awarded valuable gifts from the club Klasika and invitations to the antique automobile congress Timeless Classic 2021. Congratulations to the winners of the competition! Read more: https://www.klasika.us/2021/05/04/nuotrauku-konkursas-klasikos-kalendoriui/

Exhibition in Ukmergė city. Meeting of The Club Klasika
At the end of May, The Antique Automobile Club Klasika received a request from Ukmergė City Municipality to organize an exhibition of antique equipment during the Ukmergė City Festival. Due to the fact that The Club Klasika had already visited Ukmergė in 2013, the club members agreed to participate. It was decided to organize an exhibition of ancient equipment, to solve all the related questions at the club meeting, and then to have fun in the homestead of the club member Donatas.
Thus, on Saturday morning, July 10 the club members in the center of Ukmergė city presented 32 vintage vehicles to the audience. The wide range of production of antique equipment from 1914 to 1980 allowed the viewers to enjoy the real history of motoring. 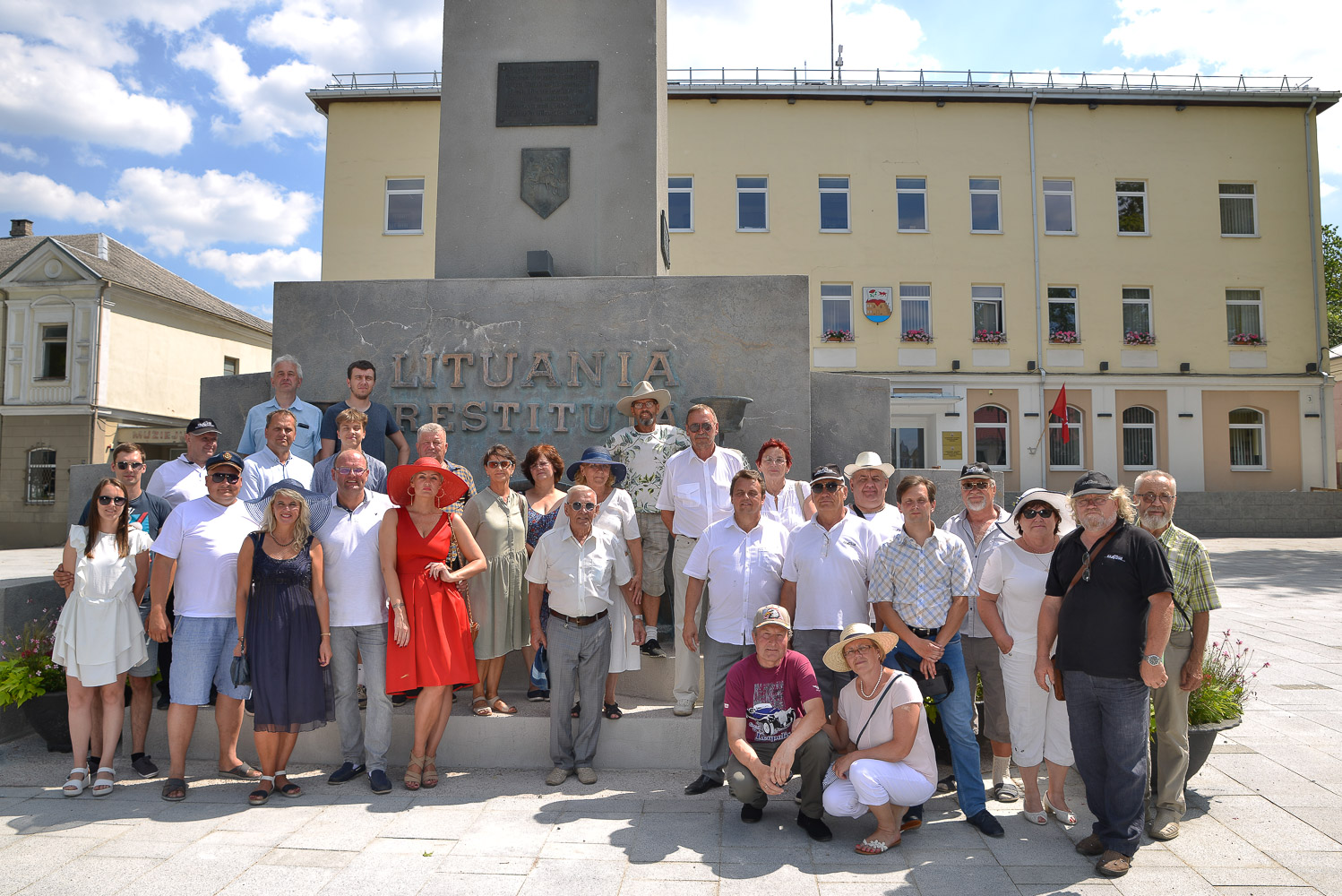 The exhibition took several hours and after that the Club Klasika members divided into two groups. The first group went on a sightseeing trip around the city and mainly there were friends and families of the club’s members. The second group, which consisted only of The Club members went to solve all the issues related to The Club Klasika.
The members of the club took part in the constructive discussions, elected the head of The Club Klasika and approved the new composition of the council. Egidijus Einoris, the founder of the club, was re-elected as the president; Vytautas Gineika, Arūnas Adomaitis, Raimondas Skridulis and Aurimas Kriauza became new members of the council.
The elections were followed by no less relevant and important issues and their solutions: two new members were admitted to the club; a report by the President of the Lithuanian Association of Historical Transport Associations was heard; the amount of the annual membership fee was adjusted; a decision was made to participate in International Federation of Historical Vehicles; a preparation plan for the funds for publishing the wall calendar for 2022 have been approved, and all current issues have been resolved.
After the meeting the party of The Club Klasika started soon. It was really fun! 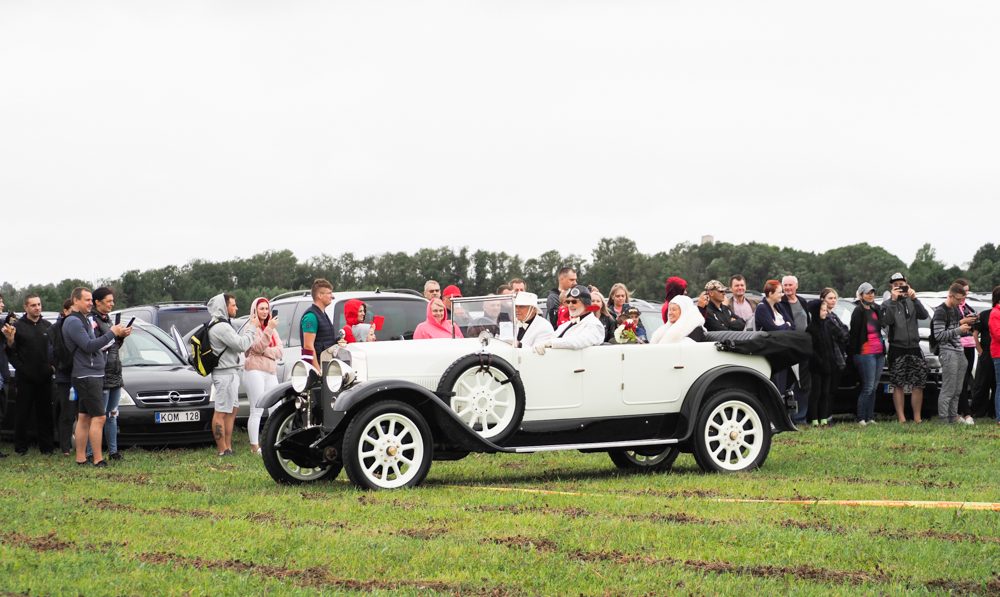 100 historical vehicles registered for the event, but only 94 came to the festival. The parade featured 33 American cars, 30 Soviet vehicles, and 31 cars made in European countries. Of these, 16 cars were made during the interwar period. Vintage cars and motorcycles were brought to the event from four countries: Poland (1), Estonia (7), Latvia (26) and Lithuania (60). 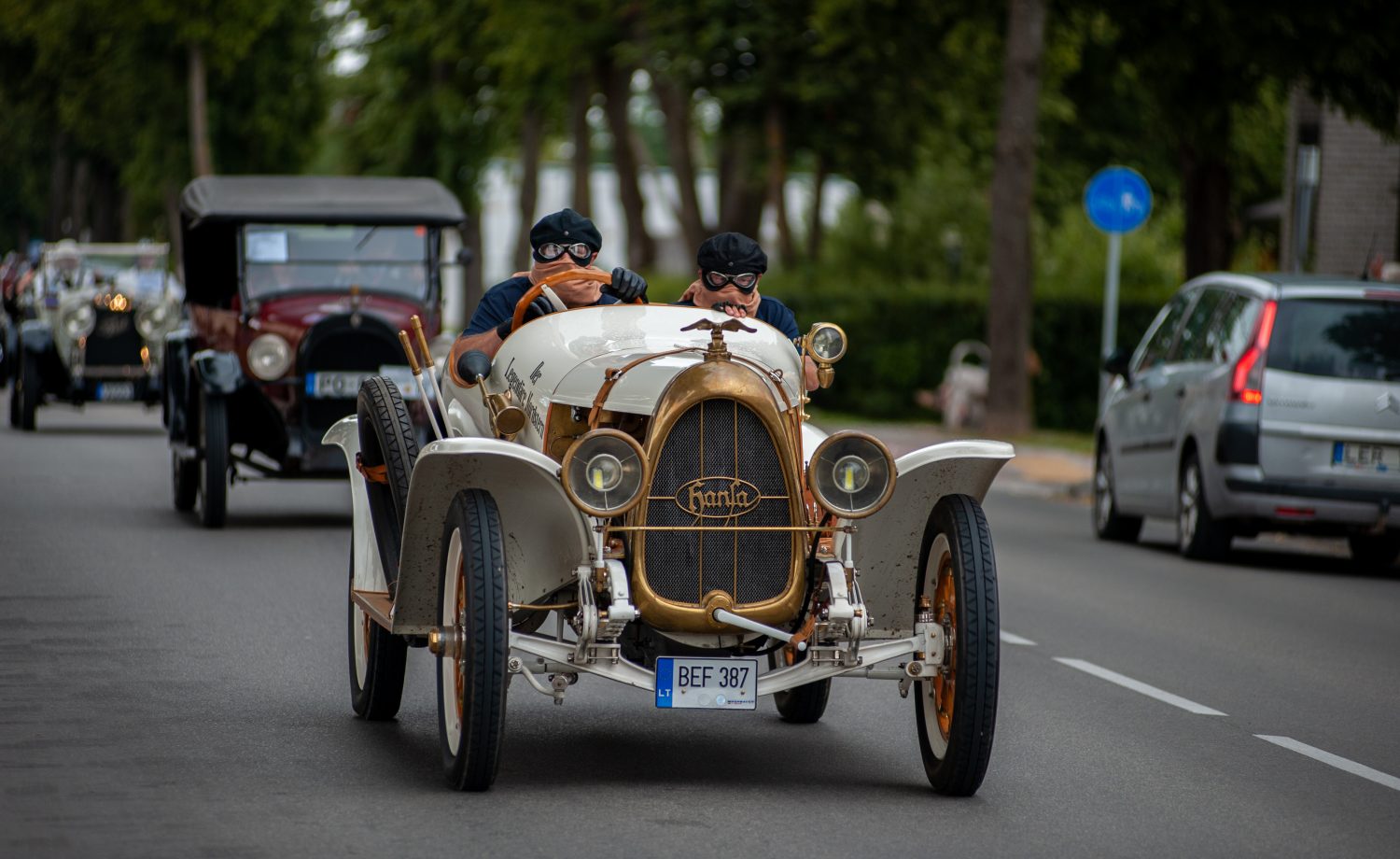 Probably the most attention-grabbing and most photographed car this time was Hansa G 12/36 Renntorpedo made in 1914 and brought to Biržai by Aleksandras Obymachas from Vilnius. The mesmerized looking two-seater sports car was only made to order in very small series. According to unofficial data, the unique specimen that came to Lithuania from Latvia about 15 years ago is the only one that has survived.
As always, seven nominations were announced at the event: Oldest Car, Best Vintage Car (built before 1946), Best Classic Car (since 1946), Best Car, Best Soviet Car, Best Restoration and Grand Prix.

Congratulations to the winners!

Club Klasika in Žeimelis
Slightly relaxed after the event Timeless Classic 2021 by the invitation of Pakruojis Vintage Machinery Club, we went to see the old and cozy town of Žeimelis on the Latvian border. We went not only to have fun, but also to take part in the exhibition of vintage equipment, organized by the Pakruojis Club, which took place during the Youth Festival. 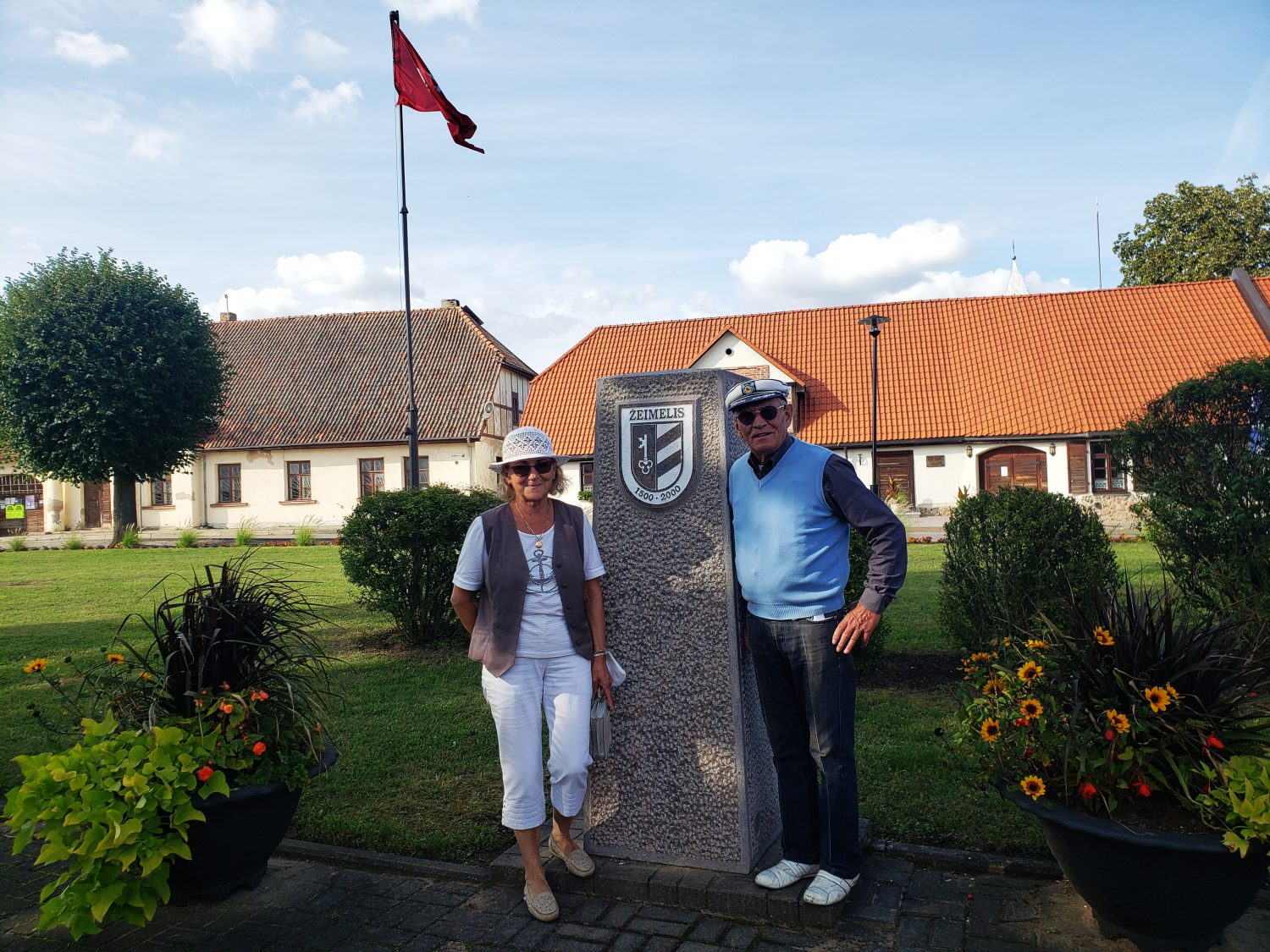 After arriving and getting acquainted with the newly elected head of the Pakruojis Vintage Machinery Club Linas Katilius, the immediate communication between the participants of the exhibition began. Of course, this was also encouraged by the tasting of Pakruojis homemade beer presented by the members of Pakruojis Club. After talking and setting the cars for the exhibition, we took a look at the Museum of Ancient Technology in Žeimelis, which is full of very interesting and strange exhibits. We got acquainted with its founder and owner Juozas and not only did we enjoy the rich exposition of ancient agricultural machinery, but we also heard the story about the mechanisms and future plans of the museum. After that, we visited the Žiemgala Museum – which was founded by Juozas Šliavas – a cousin of our club member Arūnas Adomaitis.
And as we were getting ready to return home, another surprise awaited us. Saulius Margis, the mayor of Pakruojis district, came to greet the representatives of The Club Klasika. We communicated, remembered common acquaintances, such as Eugenijus Malinauskas (resting in peace) in a particularly good word. And as we were seperating from our new friends, we wished each other not goodbye, but until the next time!

A documentary Timeless Classic 2021
Many of the activities and work that The Club Klasika does every year are becoming traditional phenomena. Documentaries, which have been created by the club’s team since 2008, from the very beginning of its existence, are no exception. Initially, these documentaries were filmed as amateur video trials. Over the years and with the growing prestige and experience of the Klasika, these images have become not only a professional film chronicle for lovers of vintage technology, but also a kind of archive.

We are presenting a documentary about the vintage car festival Timeless Classic 2021, which took place on August 7 in Biržai:  https://youtu.be/SjJYlIEBADk

The annual, anniversary photo calendar of The club Klasika
The wall calendars of The Club Klasika, which appeared exactly a decade ago, have already become not only an annual Christmas present for fans of vintage equipment, but also a yearbook of the development of Lithuanian historical cars. The first edition of 2013 has become a beautiful tradition that is continued every year. 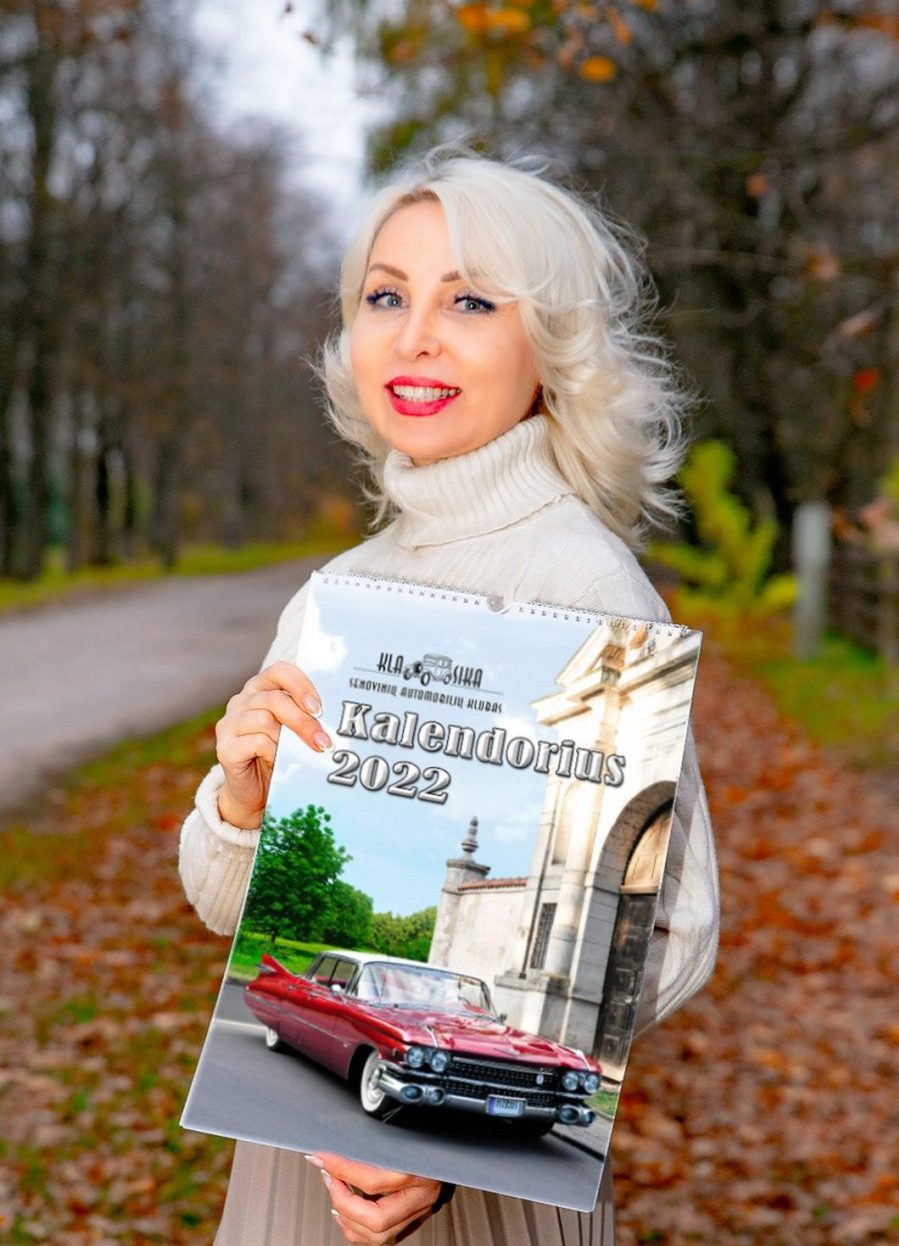 If any organization or individual decides to create calendar publications embellished with artistic photographs, these are mostly only single cases. Unlike such one-time attempts, the production of The Club Klasika is already the tenth annual publication, characterized not only by the variety of historical cars depicted, but also by the quality of photographs and the abundance of authors. In addition, this publication for fans of ancient technology not only serves a calendar information purpose, but also promotes historical technology and the people around it with its images.
For the artistic images captured in this calendar, the editorial team thanks the photographers who have been collaborating in the publication for a number of years: Ilona Daubaraitė, Dainius Nagelė, Vilhelmantas Sereika and Reda Grubinskaitė. The new masters of photography who have joined the ranks of publishers are also congratulated: Ieva Slonksnytė, Daiva Grigonienė, Markus Kliss (Estonia) and Artur Evchenko (Russia). 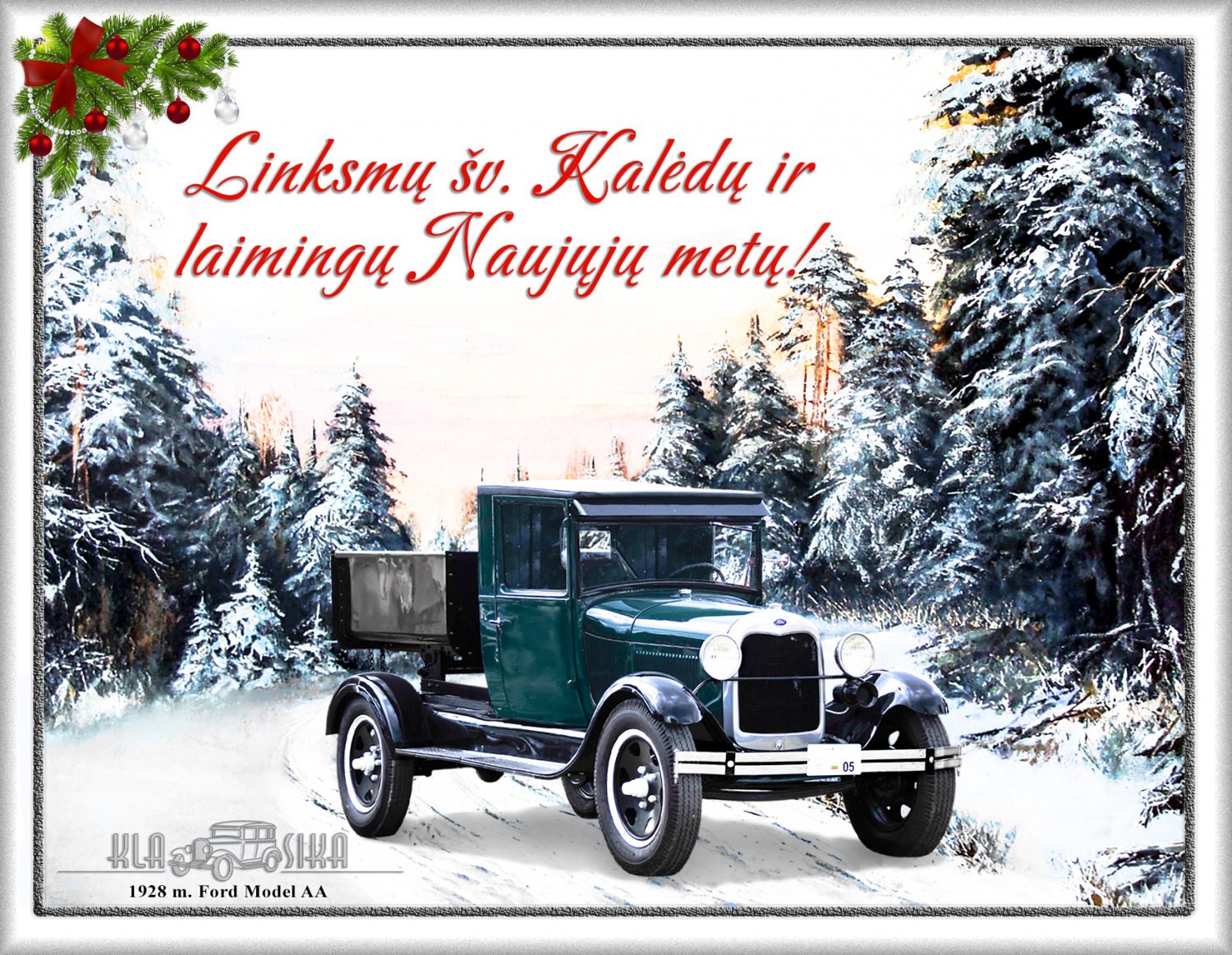 We usually print a small number of postcards, which we give to Klasika’s friends and sponsors. This year, as every year, we sent over 200 letters by Christmas.
So, be sure to check your mailbox!