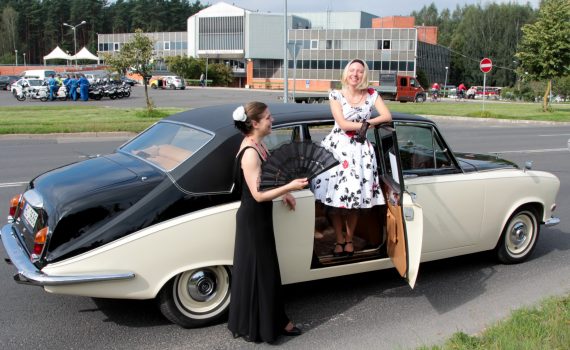 The jubilee celebration entitled “Riga Retro 2012″ started with the registration of participants in the parking lots of Rigas Motormuzejs. According to the organizers, the festival has presented over 170 cars from Latvia, Lithuania, Estonia, Russia, Belarus and Finland that were manufactured in 1923-1982. Participants were split into four groups depending on the year of make and the type of their automobiles: motorcycles; special use cars and cars made before 1945, Soviet cars, and cars made after 1945.

Lithuania was represented by 12 cars and motorcycles. Having received invitations from fellow Latvians, two members of Antique Car Club “Klasika” participated in the event. Dalius Linkevicius showcased his Oldsmobile (1929), and Egidijus Einoris participated with his Mercury Comet Convertible (1964).

After the registration was over, the attendees lined up on the Bikernieki Race Track and after doing a few laps headed towards the center of Riga. Many of the city dwellers and visitors of Riga had a chance to admire the vintage car parade in the main streets of the city and a show in the central Kalpakas Street. After the show, the old cars were in for a serious challenge – a 100 kilometers drive to the town of Cesis, where yet another car show was held. In the evening, after the show ended, participants went to a local homestead, where a party was held and everyone could rest or enjoy a conversation. It was the largest antique car show that was ever held in Latvia.