Statistics of the “Timeless Classic 2020” event 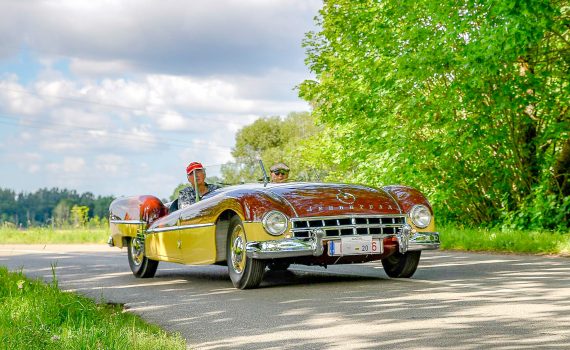 Statistics of the “Timeless Classic 2020” event

The traditional vintage cars festival “Timeless Classic” has been held in Biržai, Lithuania every year since 2008 and is probably the largest vintage car show on the eastern Baltic coast. 2020 is no exception. The event of classic car fanatics, which was bustling in city of Biržai on the first weekend of August, was so full of exotic vehicles that even the biggest enginery professionals admitted to being pleasantly surprised.

At the event of Vintage Cars “Timeless Classic 2020”, as many as 133 historic vehicles from Poland, Estonia, Latvia and Lithuania lined up at Sodeliskiai Manor. Among the vintage vehicles, we saw 3 motorcycles, 2 trucks, 1 bus, 2 steam tractors and 125 cars.
The oldest and most solid cars manufactured before 1946 included 17 interwar exhibits. Powerful American machinery was represented at the festival by 40 historic vehicles, and Americans outnumbered Soviet machinery by 39 cars, motorcycles, and trucks. This year’s festival “Timeless Classic 2020” was dominated by European cars, of which there were as many as 54.

The participants of the festival competed in seven nominations: the oldest car, the best vintage car made before 1946, the best classic car since 1945, the most beautiful car, the best Soviet car, the best restoration and the Grand Prix. All exhibits were carefully inspected and evaluated by an international committee of historical enginery experts.

According to the decision of the evaluation committee that worked at the event, Kestutis Banevicius’ Peugeot 203 C, manufactured in 1959, was chosen as the best classic car.

The best Soviet vintage vehicle was the GAZ 13 – Chaika, a symbol of Soviet luxury and power driven by a guest from Estonia Tonu Maksimov, made in 1967.

Not once the award for the best restorer for his excellent work went to the Latvian Andrejs Rode. He came to Birzai with a 1933 Mercedes-Benz 230. Precise car restoration is visible even to the average spectator, at least somewhat interested in cars, or at least with a perception.

Sigitas Zajarskas won the category of the best vintage cars by presenting one of the oldest car in the festival, the Chrysler CD 8. This car rolled away from the conveyor in 1931.

At the exhibition, in the nomination for the oldest car, the trophy went to Alfred Zamockis, who presented the Oldsmobile 30 A, which will soon celebrate its 100th birthday. This vintage “old man” saw the light of day in the interwar period – in 1923.

It’s no wonder that Aleksandras Obymacha, who presented the unique 1953 roadster Leningrad, won two awards at once – the title of the most beautiful car and the Grand Prix of the Event. Under the Grand Prix concept contains everything – great restoration, attention to the details, beauty, uniqueness and many other factors, which this time fit into one car and one name – Leningrad.