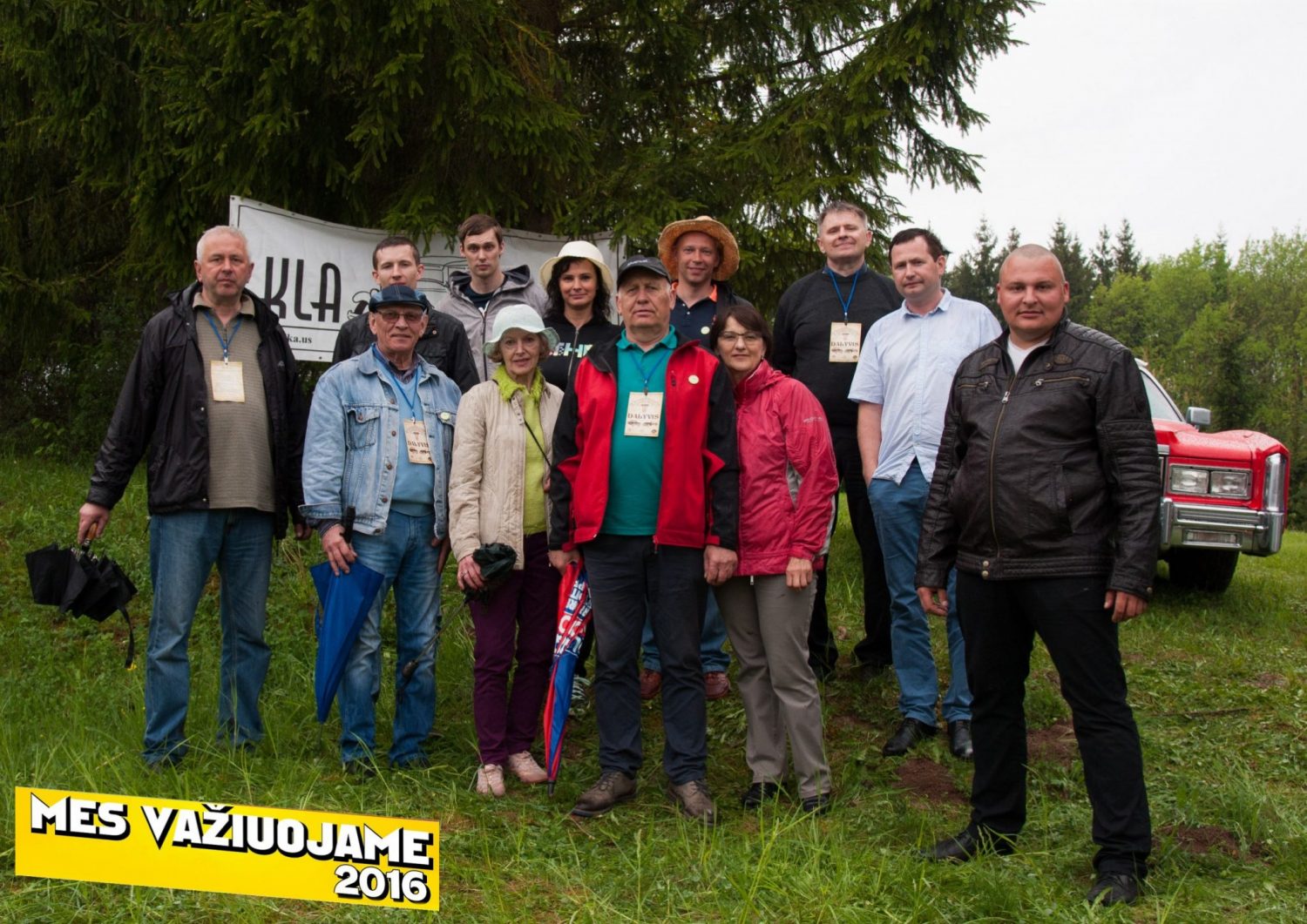 
As every year, the first club “Klasika” car spring drive began with a trip to Pasvalys. It is like a sign, that after the long winter months, we are driving again. To tell the truth, this festival is called so. It has already been the eighth year inviting to Pasvalys antique vehicle lovers from all over Lithuania. This event brings together all those who can only drive or ride. And, don’t be surprised, if you will see not only the historic cars and motorcycles, but a bit newer technique. They are, after all, willing and able to go…
Thus, according to the organizers, this year, even 150 different vehicles gathered to Pasvalys. It’s a pity, that the rain and the bad weather let to admire nor plentiful variety of technique neither the various attractions waiting for spectators in the Sinkholes Park. And there were many: all kinds of moving machinery parade along the streets of the city, exhibition, 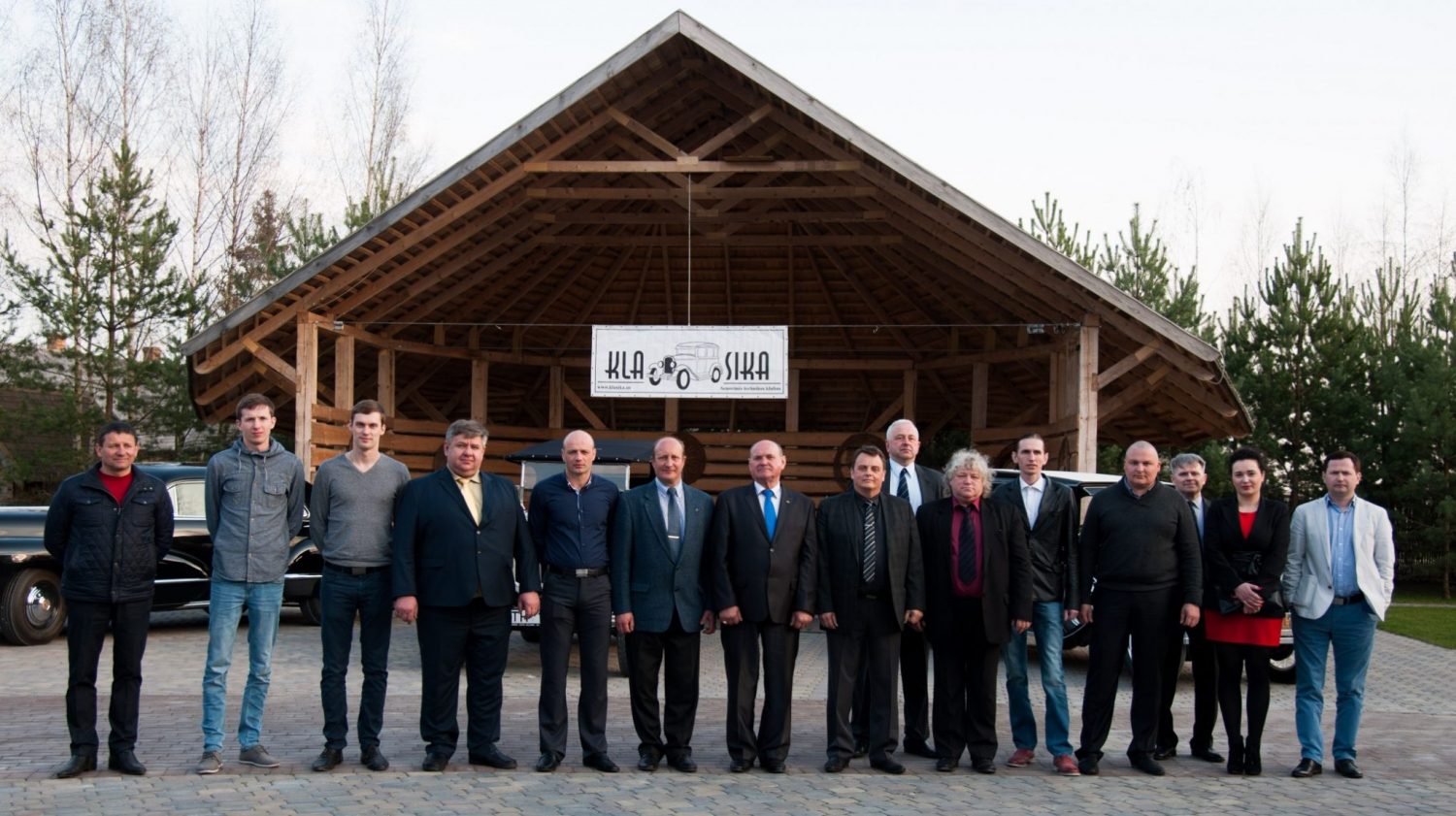 
Every spring, the Antique vehicle Club “Klasika” hosts the historical technique season opening party. This meeting previously was only for the club members, currently, has become an international event, which unites famous collectors and fans of classical cars. This year, like last, this festival was held in the club members’ Dalius Linkevičius owned Sodeliškiai Manor.

Well, on April 16, club “Klasika” support-season opening banquet brought together many honorable guests. They were nothing more than a little – one hundred and eleven of the real friends. By the way, this evening was not only for


Nature plays the strange tricks on us. The weather is so warm, so that even makes you want to pull your oldish car out of garage and … go to look for Santa Claus. You say, long way should I go? Or maybe you think that our club “Klasika” old technique would not withstand? Joke – a joke, but the holidays are approaching. And while waiting for Santa Claus, we would like to review the traditional Antique Vehicle Club “Klasika” work done, share experiences and to wish good luck…
Let me start with the fact that most of the vintage cars promoting clubs in Lithuania identify their activities only with cars and motorcycles demonstration. Maybe it is not bad, but sometimes it can be done and a bit more subtle – through the media, visual materials, publishing, advertising and educational programs. Our club “Klasika” – still the only club in Lithuania, popularizing antique vehicles among students. Last year launched an educational 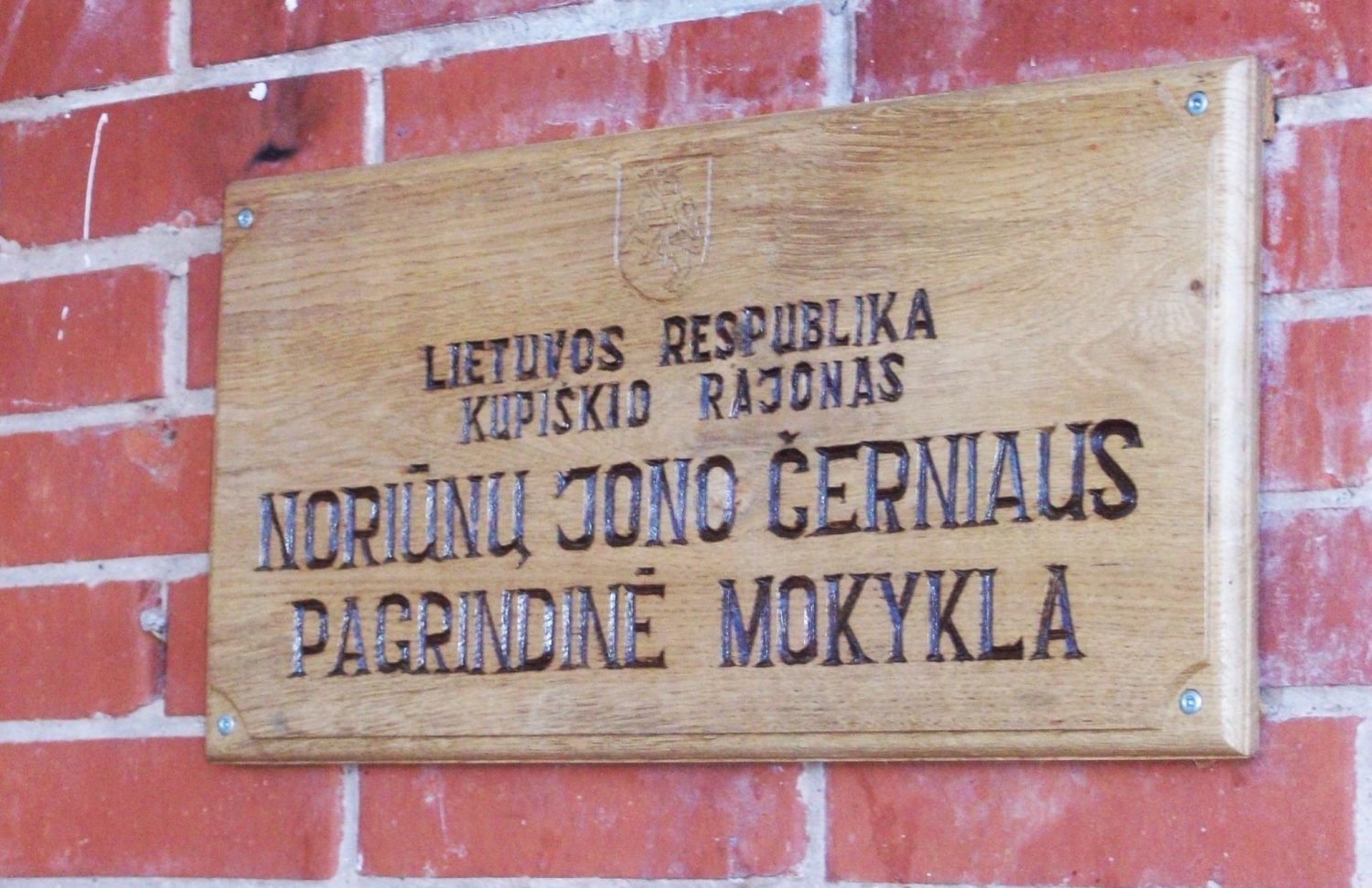 
On 25th of February, in Noriūnai Jonas Černius main school (Kupiškis district), there was organised a meeting with the members of Antique Vehicles Club “Klasika”. Club founder Egidijus Einoris introduced the members of the club, told the club’s foundation history, presented the activities and showed a documentary movie about last year’s antique vehicles exhibition in Biržai. About 100 members of the school community participated in the meeting with the members of the club. Children were so engaged in listening to the story and watching a movie that you could hear the flies fly. Teachers were fascinated by the students getting so interested. They usually does not focus attention on something for more than 15 minutes, because they want to be very proactive … The participating students ranged in age from 8 to 18 years.

After the film watching, the collection of old gramophones, record-players and music boxes was introduced to the students’ attention. Club “Klasika” member Klementas Sakalauskas demonstrated the exhibits of his own museum – the audio playback devices from the past. K. Sakalauskas presented his museum which is founded in Piniava, Panevežys district. Mr.Klementas played the brought instruments, demonstrated the antique “CDs” – plates and vynil records, told their story and invited to visit the museum. Businessman Gediminas Aleksandravičius arrived to the meeting by an antique car – Studebaker Commander, made ​​in 1955. Students looked around it and asked a businessman a lot of questions related to antique vehicles. It can be said that thanks to the club “Klasika”, the school community deepened historical and ethnographic knowledge. School community was fascinated by the activities of the club and are looking forward to new meetings. We recommend other schools to communicate and co-operate with the Antique Vehicles Club “Klasika”. Thank you! 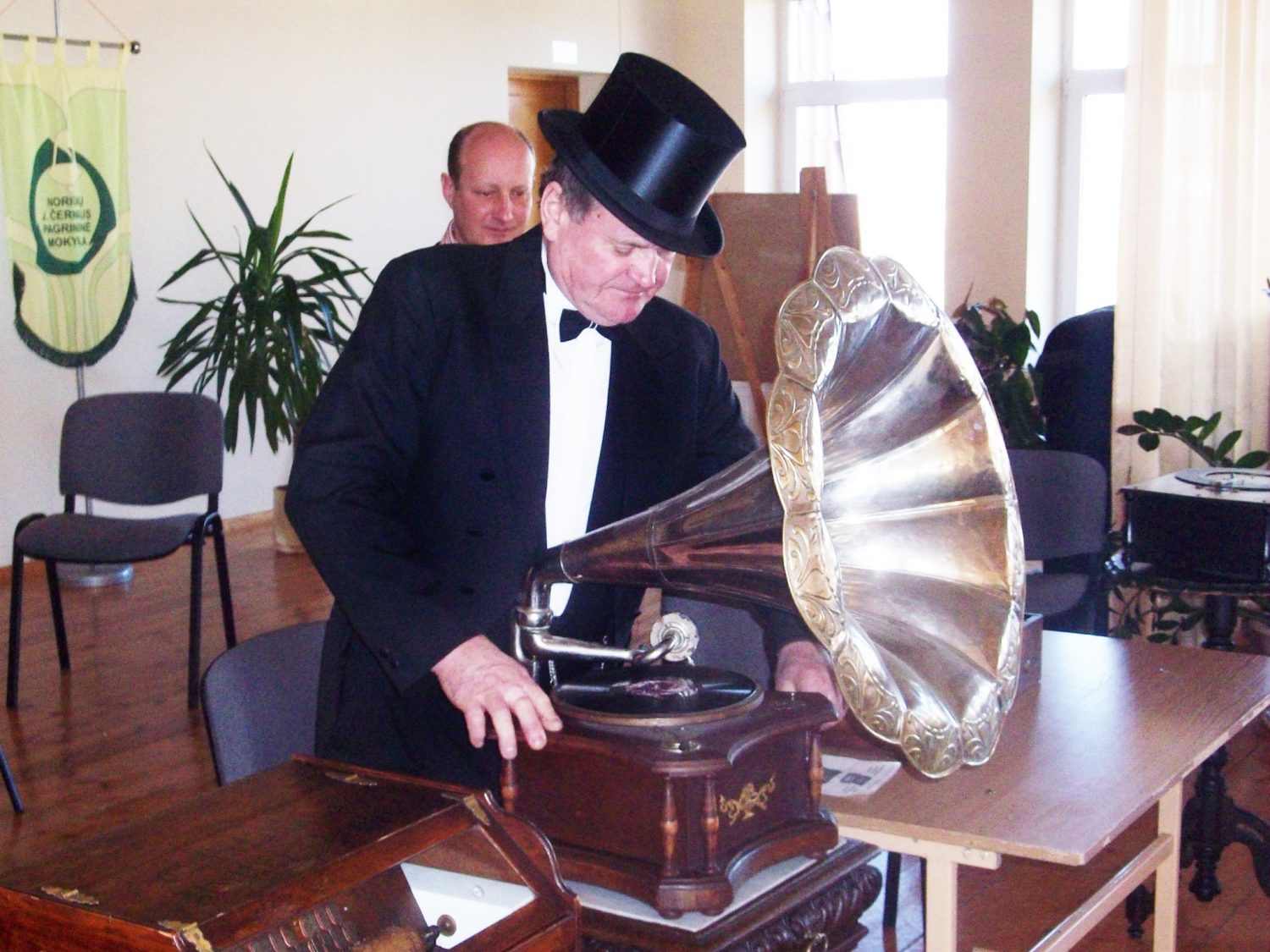 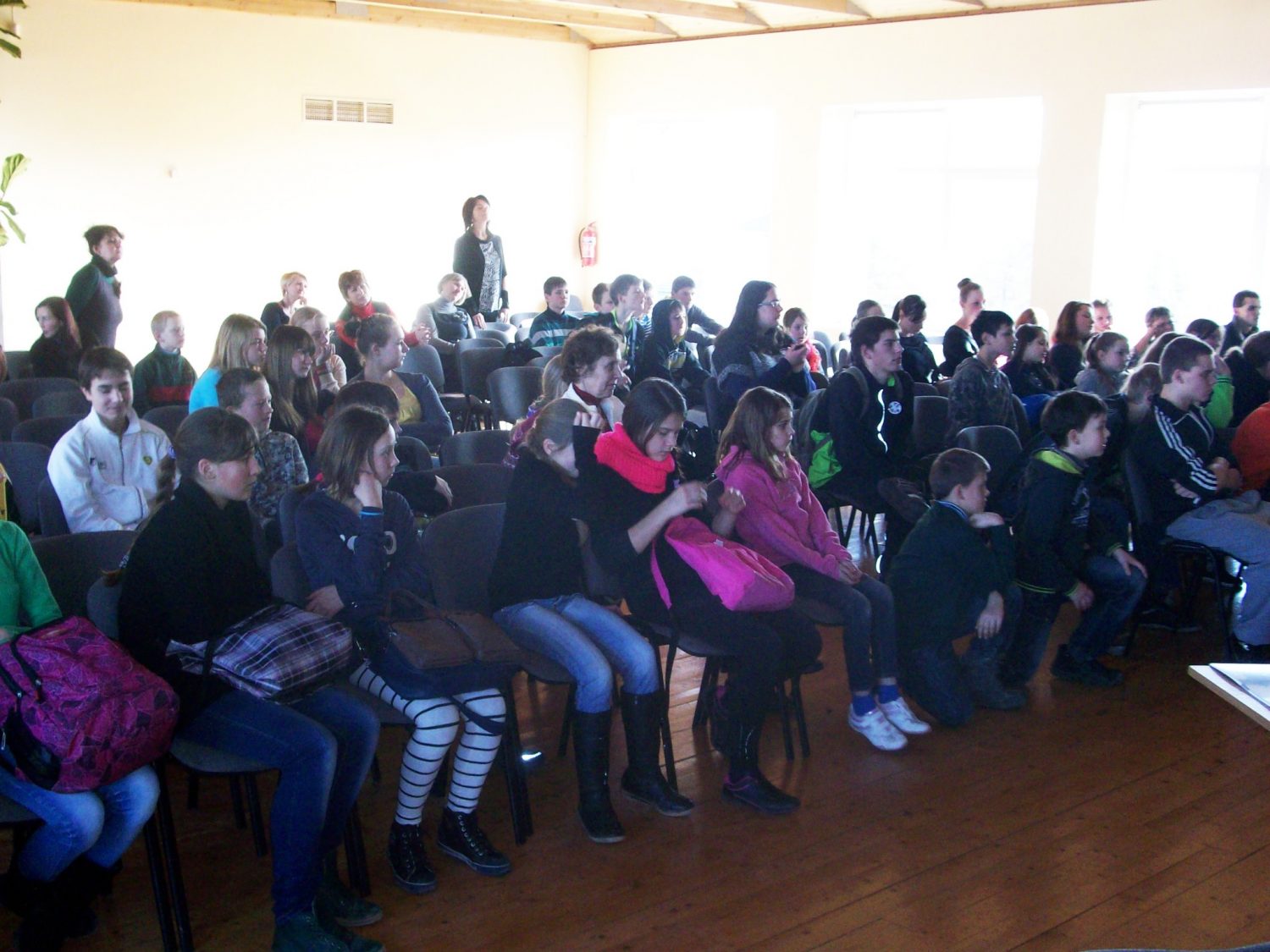 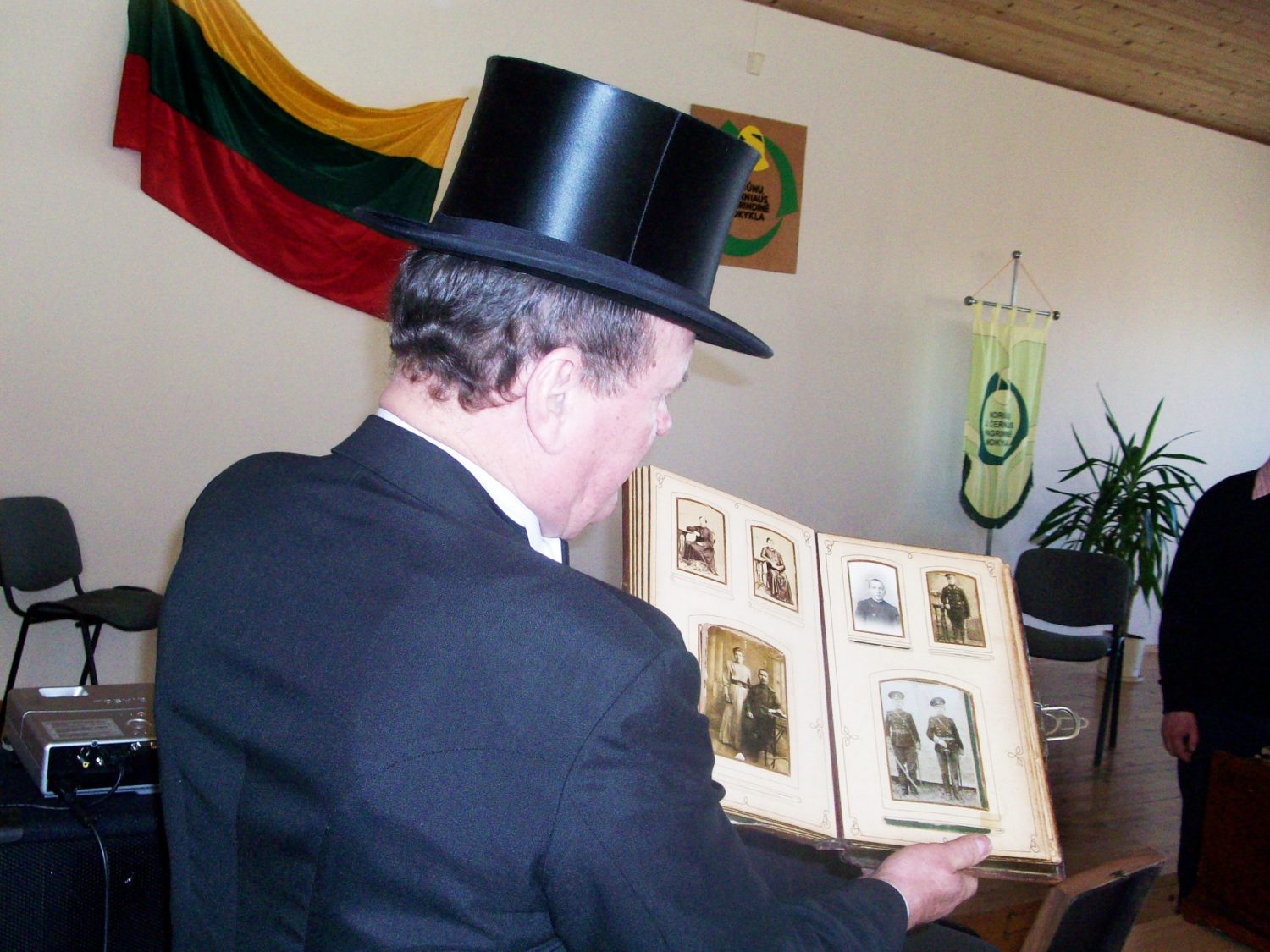 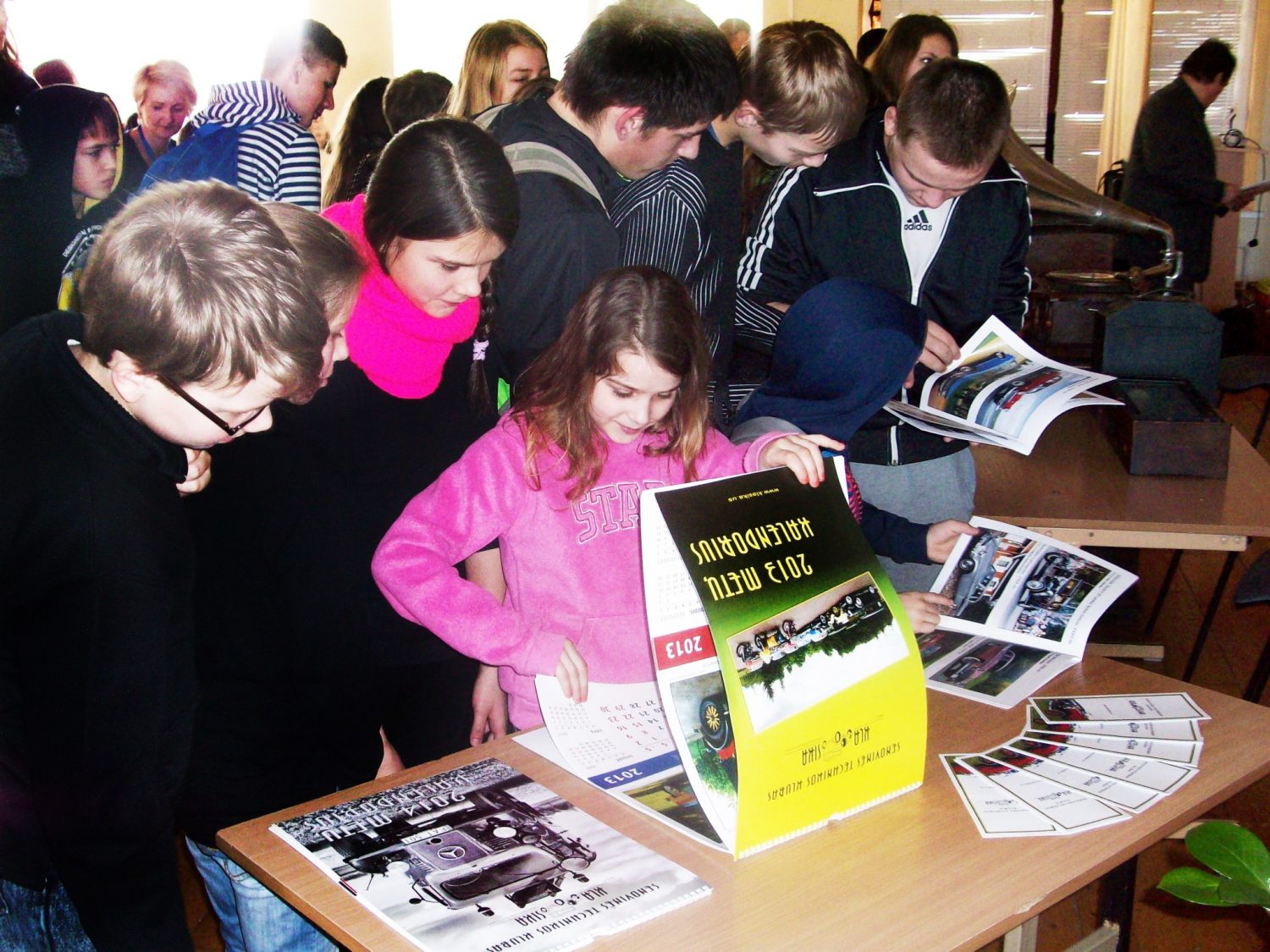 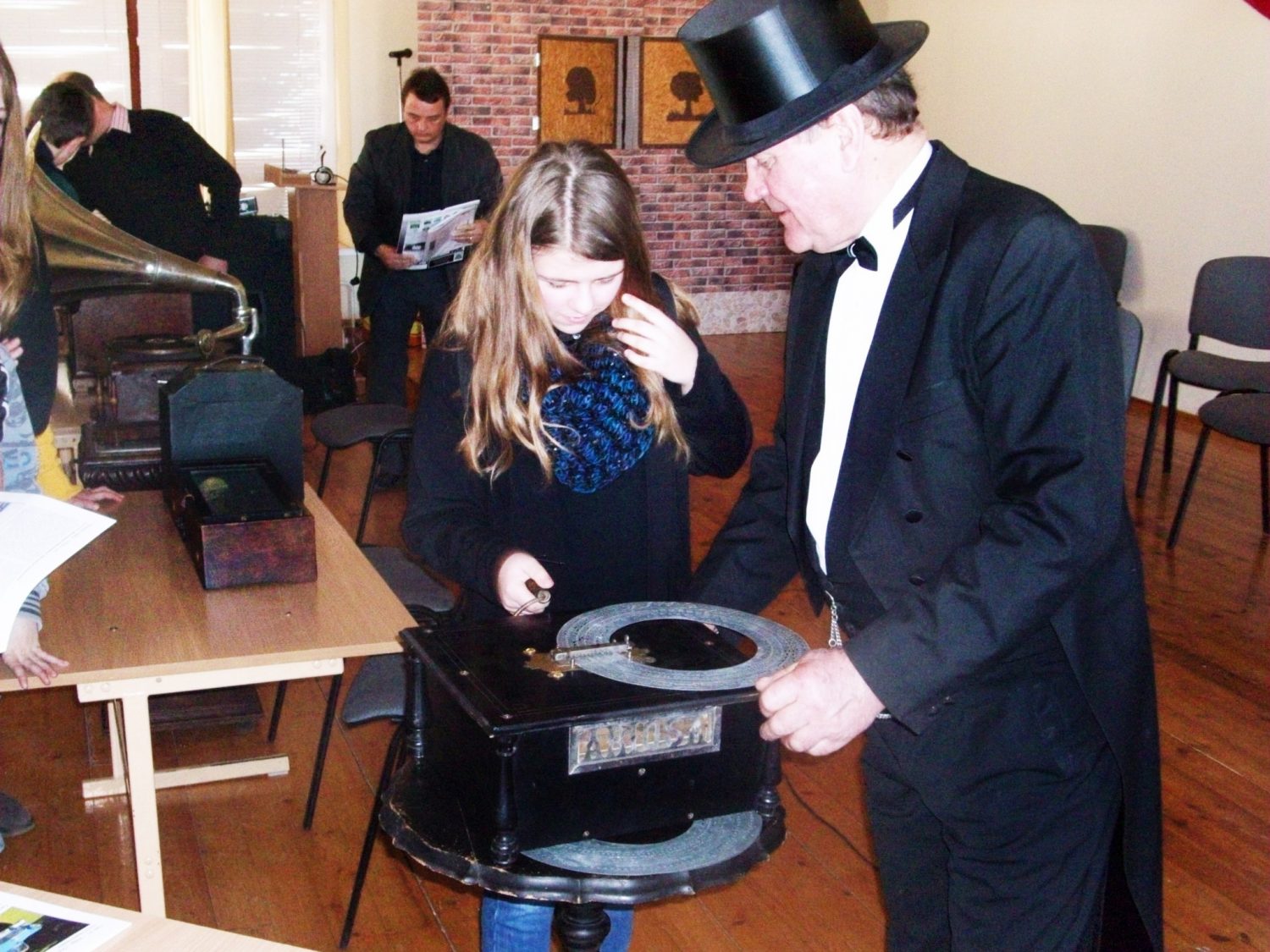 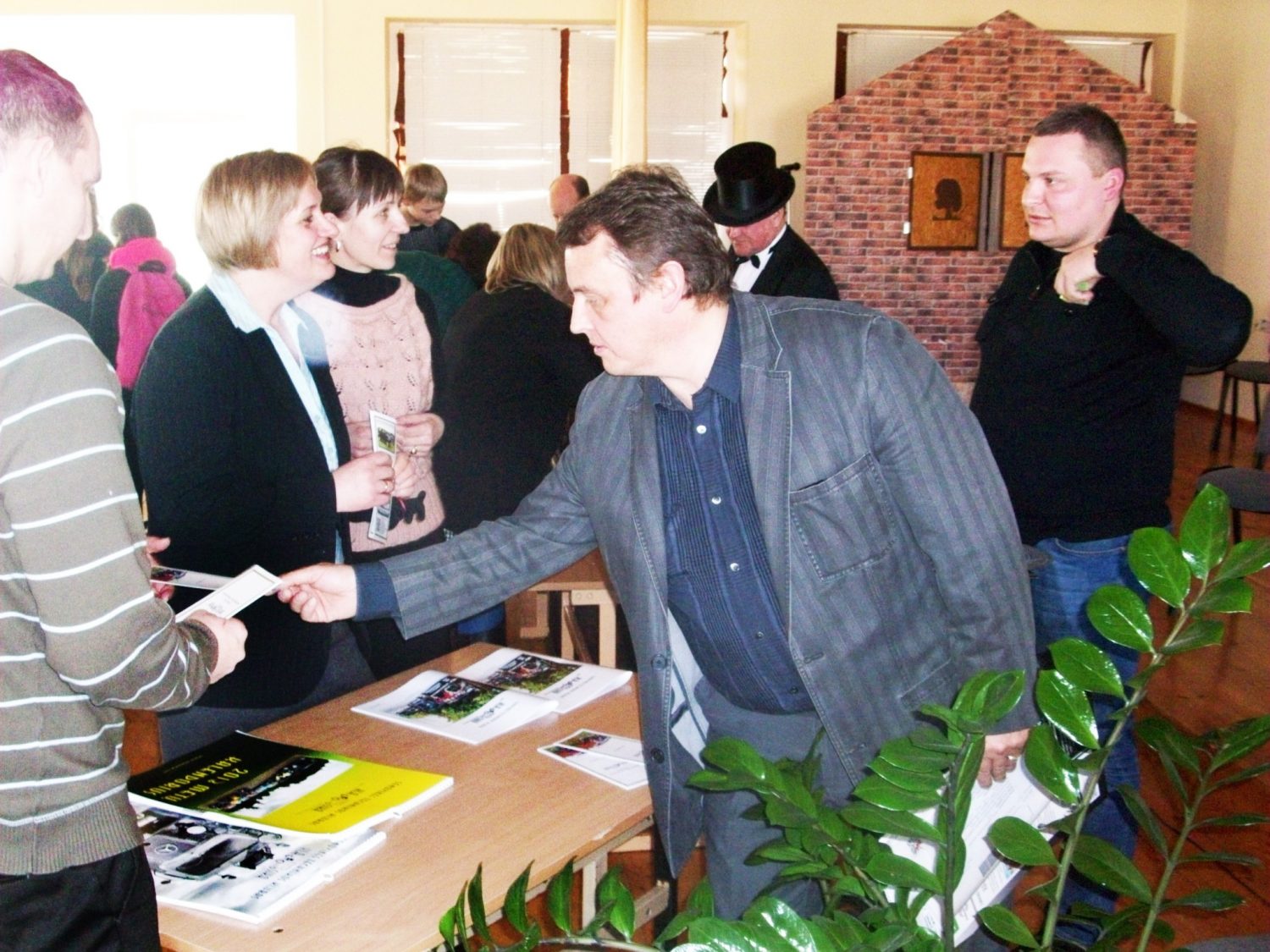 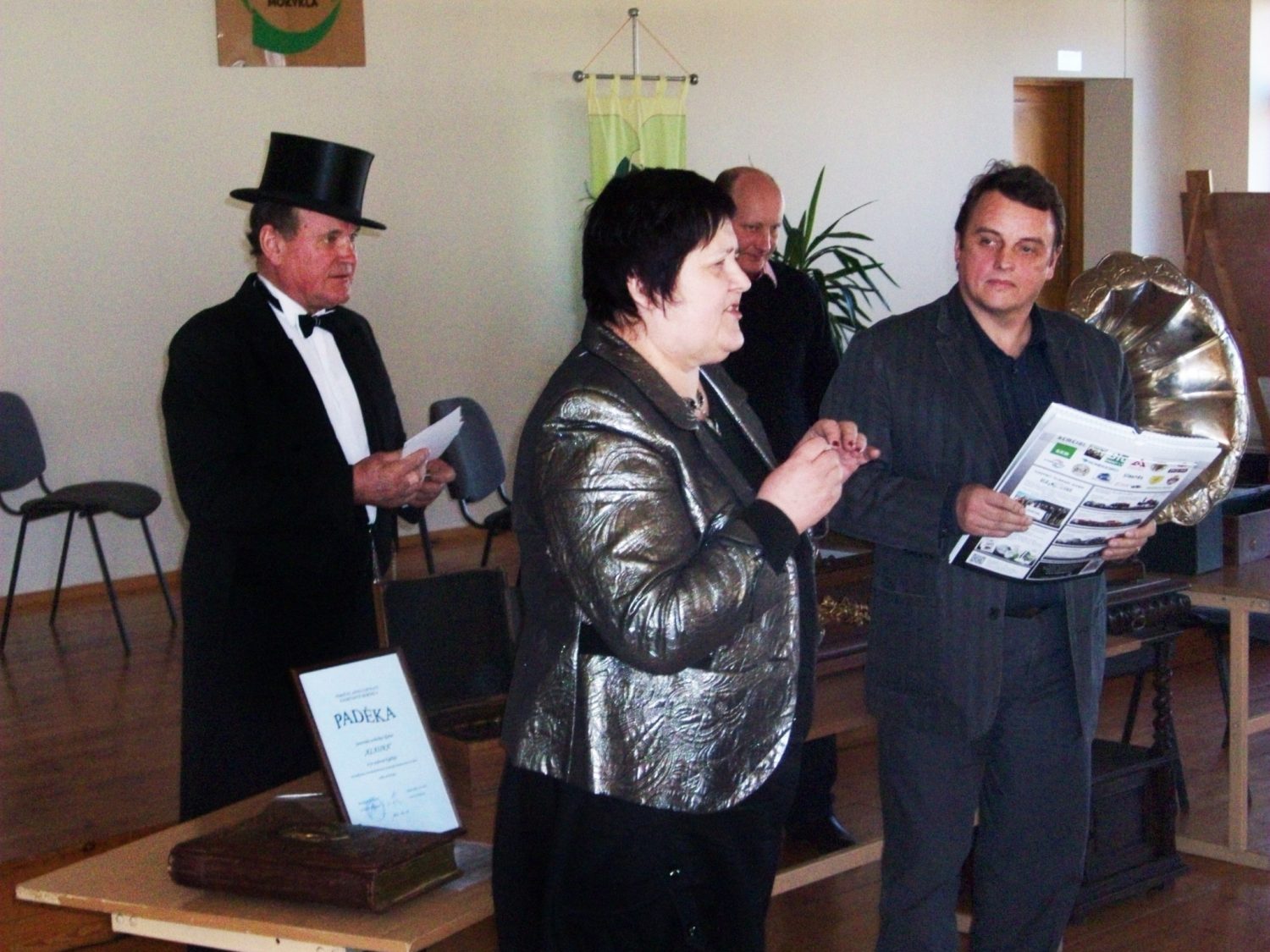 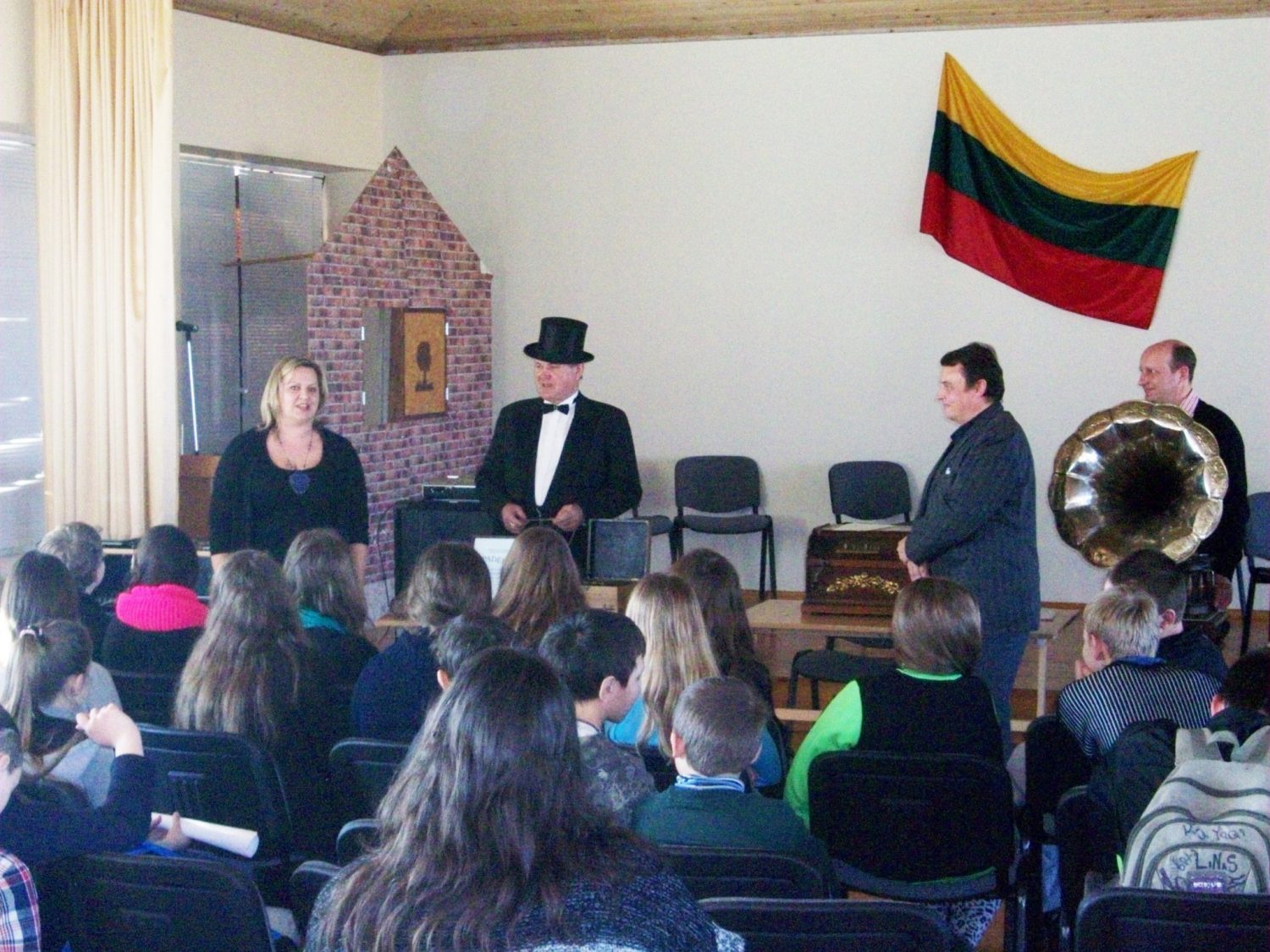 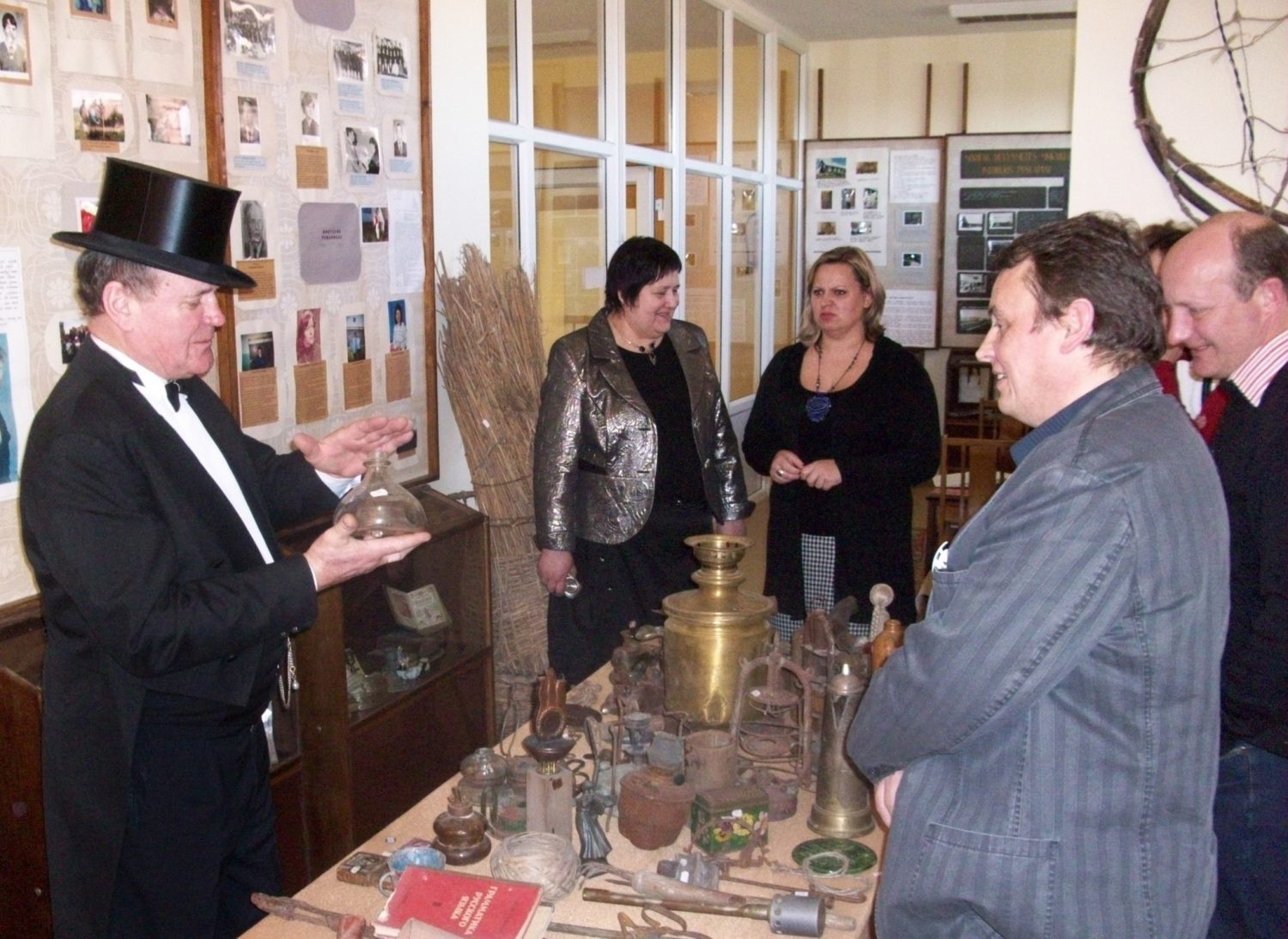 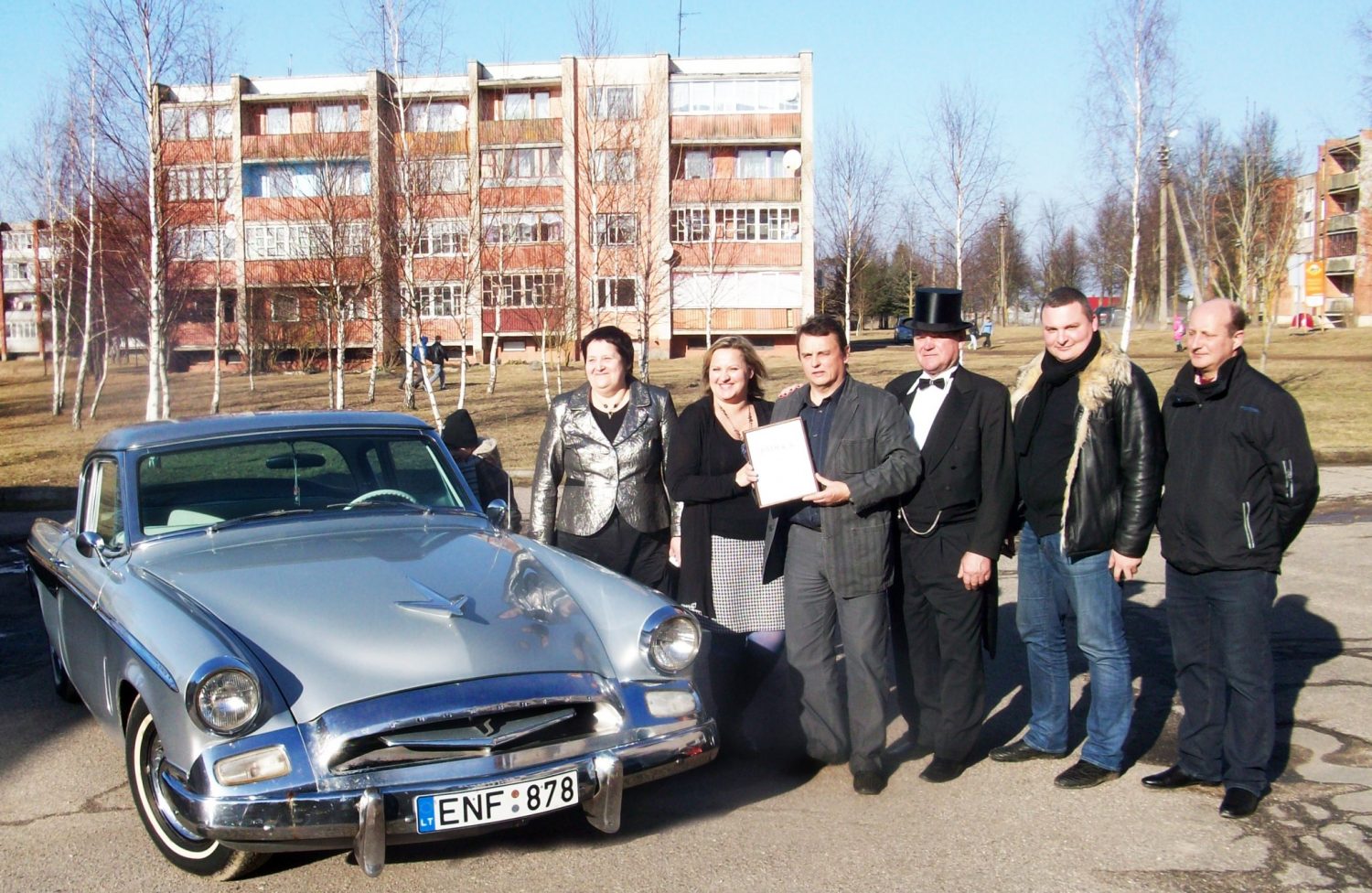 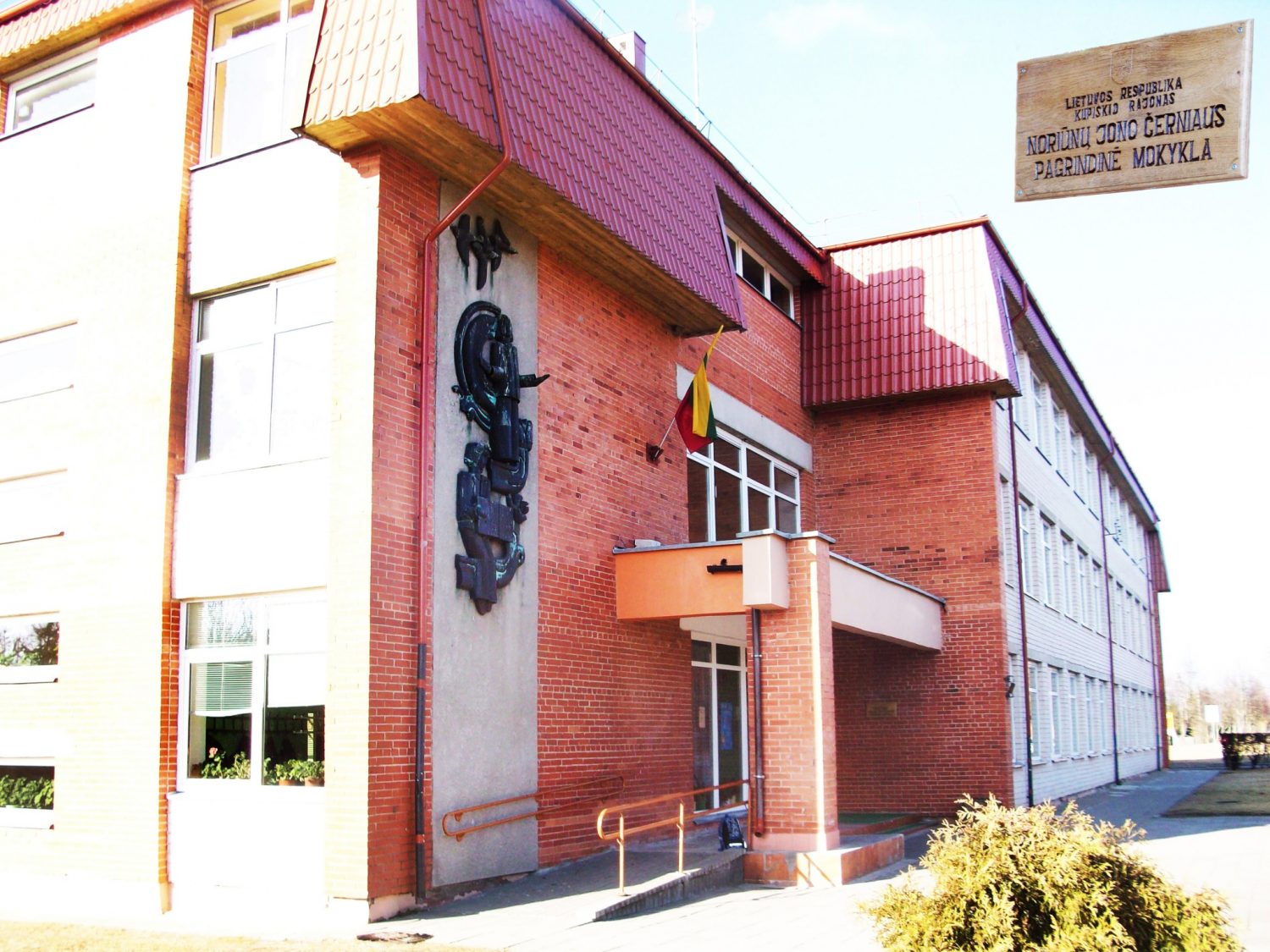 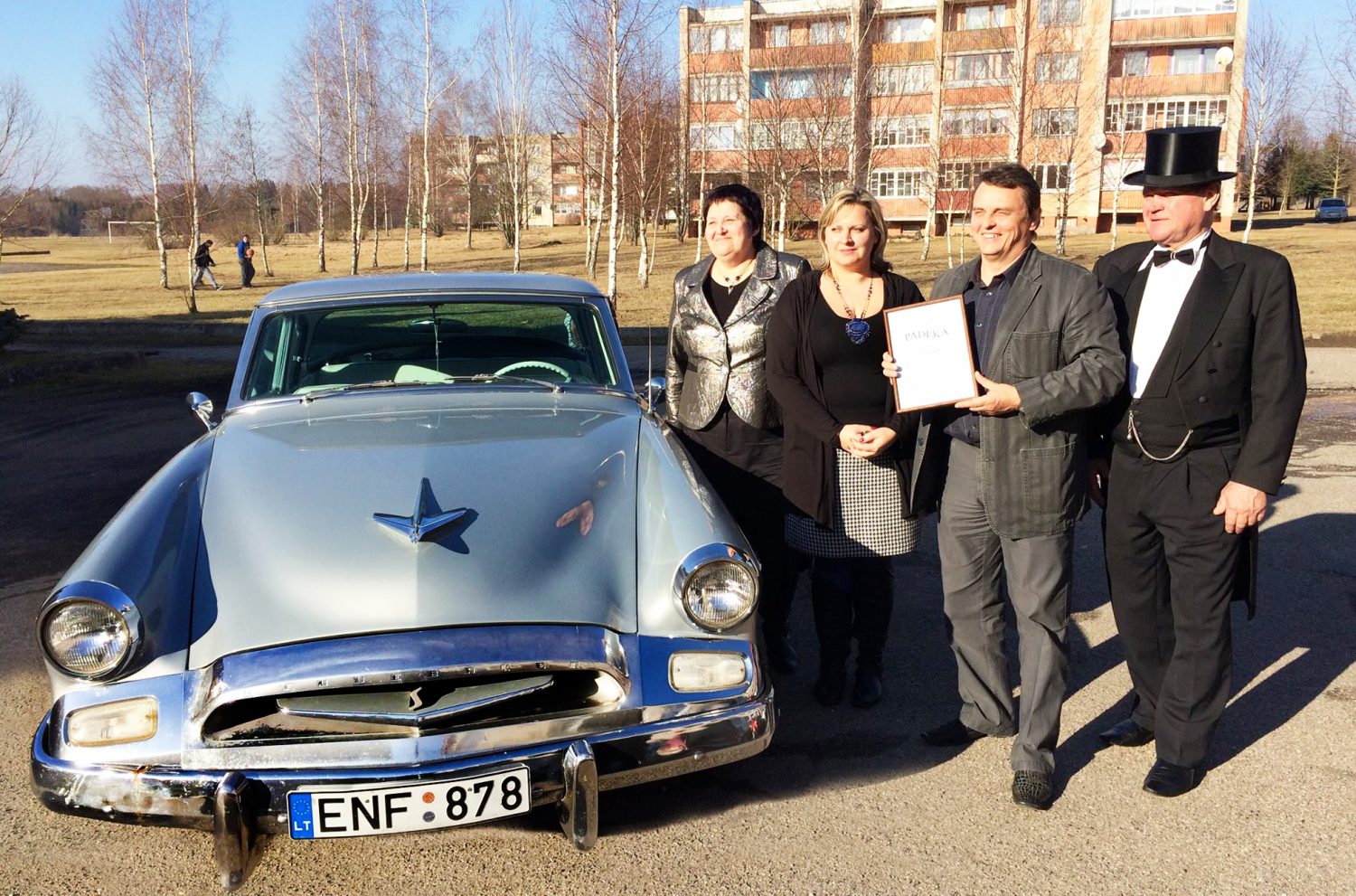